Lucy Raymond Or, The Children's Watchword 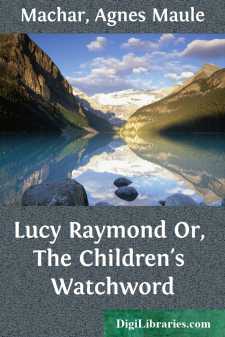 he light of a lovely Sabbath afternoon in June lay on the rich green woodlands, still bright with the vivid green of early summer, and sparkled on the broad river, tossed by the breeze into a thousand ripples, that swept past the village of Ashleigh. It would have been oppressively warm, but for the breeze which was swaying the long branches of the pine-trees around the little church, which from its elevation on the higher ground looked down upon the straggling clusters of white houses nestling in their orchards and gardens that sloped away below. The same breeze, pleasantly laden with the mingled fragrance of the pines and of the newly-cut hay, fanned the faces of the children, who in pretty little groups—the flickering shadows of the pines falling on their light, fluttering summer dresses—were approaching the church, the grave demeanour of a few of the elder ones showing that their thoughts were already occupied by the pleasant exercises of the Sunday school.

Along a quiet, shady path, also leading to the church, a lady was slowly and thoughtfully walking, on whose countenance a slight shade of sadness, apparently, contended with happier thoughts. It was Mary Preston's last Sunday in her old home, previous to exchanging it for the new one to which she had been looking forward so long; and full as her heart was of thankfulness to God for the blessings He had bestowed, she could not take farewell of the Sunday school in which she had taught for several years, without some regret and many misgivings. Where, indeed, is the earnest teacher, however faithful, who can lay down the self-imposed task without some such feelings? Has the heart been in the work? Have thought and earnestness entered into the weekly instruction? Has a Christian example given force to the precepts inculcated? Above all, has there been earnest, persevering prayer to the Lord of the harvest, in dependence on whom alone the joyful reaping time can be expected?

Such were some of the questions which had been passing through Miss Preston's mind; and the smile with which she greeted her class as she took her place was a little shadowed by her self-condemning reflections—reflections which her fellow-teachers would have thought quite uncalled for in one who had been the most zealous and conscientious worker in that Sunday school. But Mary Preston little thought of comparing herself with others. She knew that to whom "much is given, of him shall be much required;" and judging herself by this standard, she felt how little she had rendered to the Lord for His benefits to her. As her wistful glance strayed during the opening hymn to the faces of her scholars, she could not help wondering what influence the remembrance of what she had tried to teach them would exert on their future lives.

As her class had been much diminished by recent changes, and in view of her approaching departure the blanks had not been filled up, it consisted on this Sunday of only three girls, of ages varying from twelve to fourteen, but differing much in appearance, and still more widely in character and in the circumstances of their lives.

Close to Miss Preston, and watching every look of the teacher she loved and grieved at losing, sat Lucy Raymond, the minister's motherless daughter, a slight, delicate-looking girl, with dark hair and bright grey eyes, full of energy and thought, but possessing a good deal of self-will and love of approbation,—dangerous elements of character unless modified and restrained by divine grace.

Next to her sat fair, plump, rosy-cheeked, curly-haired Bessie Ford, from the Mill Bank Farm—an amiable, kind-hearted little damsel, and a favourite with all her companions, but careless and thoughtless, with a want of steadiness and moral principle which made her teacher long to see the taking root of the good seed, whose development might supply what was lacking....