Lucretia Borgia According to Original Documents and Correspondence of Her Day 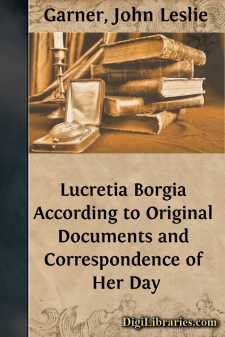 Lucretia Borgia is the most unfortunate woman in modern history. Is this because she was guilty of the most hideous crimes, or is it simply because she has been unjustly condemned by the world to bear its curse? The question has never been answered. Mankind is ever ready to discover the personification of human virtues and human vices in certain typical characters found in history and fable.

The Borgias will never cease to fascinate the historian and the psychologist. An intelligent friend of mine once asked me why it was that everything about Alexander VI, Cæsar, and Lucretia Borgia, every little fact regarding their lives, every newly discovered letter of any of them, aroused our interest much more than did anything similar concerning other and vastly more important historic characters. I know of no better explanation than the following: the Borgias had for background the Christian Church; they made their first appearance issuing from it; they used it for their advancement; and the sharp contrast of their conduct with the holy state makes them appear altogether fiendish. The Borgias are a satire on a great form or phase of religion, debasing and destroying it. They stand on high pedestals, and from their presence radiates the light of the Christian ideal. In this form we behold and recognize them. We view their acts through a medium which is permeated with religious ideas. Without this, and placed on a purely secular stage, the Borgias would have fallen into a position much less conspicuous than that of many other men, and would soon have ceased to be anything more than representatives of a large species.

We possess the history of Alexander VI and Cæsar, but of Lucretia Borgia we have little more than a legend, according to which she is a fury, the poison in one hand, the poignard in the other; and yet this baneful personality possessed all the charms and graces.

Victor Hugo painted her as a moral monster, in which form she still treads the operatic stage, and this is the conception which mankind in general have of her. The lover of real poetry regards this romanticist's terrible drama of Lucretia Borgia as a grotesque manifestation of the art, while the historian laughs at it; the poet, however, may excuse himself on the ground of his ignorance, and of his belief in a myth which had been current since the publication of Guicciardini's history.

Roscoe, doubting the truth of this legend, endeavored to disprove it, and his apology for Lucretia was highly gratifying to the patriotic Italians. To it is due the reaction which has recently set in against this conception of her. The Lucretia legend may be analyzed most satisfactorily and scientifically where documents and mementos of her are most numerous; namely, in Rome, Ferrara, and Modena, where the archives of the Este family are kept, and in Mantua, where those of the Gonzaga are preserved. Occasional publications show that the interesting question still lives and remains unanswered.

The history of the Borgias was taken up again by Domenico Cerri in his work, Borgia ossia Alessandro VI, Papa e suoi contemporanei, Turin, 1858. The following year Bernardo Gatti, of Milan, published Lucretia's letters to Bembo. In 1866 Marquis G. Campori, of Modena, printed an essay entitled Una vittima della storia Lucrezia Borgia, in the Nuova Antologia of August 31st of that year. A year later Monsignor Antonelli, of Ferrara, published Lucrezia Borgia in Ferrara, Sposa a Don Alfonso d'Este, Memorie storiche, Ferrara, 1867. Giovanni Zucchetti, of Mantua, immediately followed with a similar opuscule: Lucrezia Borgia Duchessa di Ferrara, Milano, 1869. All these writers endeavored, with the aid of history, to clear up the Lucretia legend, and to rehabilitate the honor of the unfortunate woman.

Other writers, not Italians, among them certain French and English authors, also took part in this effort. M. Armand Baschet, to whom we are indebted for several valuable publications in the field of diplomacy, announced in his work, Aldo Manuzio, Lettres et Documents, 1494-1515, Venice, 1867, that he had been engaged for years on a biography of Madonna Lucretia Borgia, and had collected for the purpose a large mass of original documents.

In the meantime, in 1869, there was published in London the first exhaustive work on the subject: Lucrezia Borgia, Duchess of Ferrara, a Biography, illustrated by rare and unpublished documents, by William Gilbert....