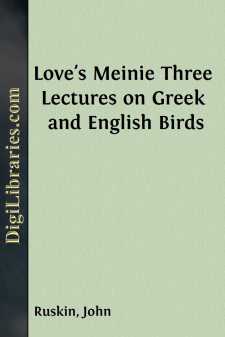 The birds chirping feebly,—mostly chaffinches answering each other, the rest discomposed, I fancy, by the June snow; the lake neither smooth nor rippled, but like a surface of perfectly bright glass, ill cast; the lines of wave few and irregular, like flaws in the planes of a fine crystal.

I see this book was begun eight years ago;—then intended to contain only four Oxford lectures: but the said lectures also 'intended' to contain the cream of forty volumes of scientific ornithology. Which intentions, all and sundry, having gone, Carlyle would have said, to water, and more piously-minded persons, to fire, I am obliged now to cast my materials into another form: and here, at all events, is a bundle of what is readiest under my hand. The nature and name of which I must try to make a little more intelligible than my books have lately been, either in text or title.

'Meinie' is the old English word for 'Many,' in the sense of 'a many' persons attending one, as bridesmaids, when in sixes or tens or dozens;—courtiers, footmen, and the like. It passes gradually into 'Menial,' and unites the senses of Multitude and Servitude.

In the passages quoted from, or referred to in, Chaucer's translation of the Romance of the Rose, at the end of the first lecture, any reader who cares for a clue to the farther significances of the title, may find one to lead him safely through richer labyrinths of thought than mine: and ladder enough also,—if there be either any heavenly, or pure earthly, Love, in his own breast,—to guide him to a pretty bird's nest; both in the Romances of the Rose and of Juliet, and in the Sermons of St. Francis and St. Bernard.

The term 'Lecture' is retained, for though I lecture no more, I still write habitually in a manner suited for oral delivery, and imagine myself speaking to my pupils, if ever I am happily thinking in myself. But it will be also seen that by the help of this very familiarity of style, I am endeavoring, in these and my other writings on Natural History, to compel in the student a clearness of thought and precision of language which have not hitherto been in any wise the virtues, or skills, of scientific persons. Thoughtless readers, who imagine that my own style (such as it is, the one thing which the British public concedes to me as a real power) has been formed without pains, may smile at the confidence with which I speak of altering accepted, and even long-established, nomenclature. But the use which I now have of language has taken me forty years to attain; and those forty years spent, mostly, in walking through the wilderness of this world's vain words, seeking how they might be pruned into some better strength. And I think it likely that at last I may put in my pruning-hook with effect; for indeed a time must come when English fathers and mothers will wish their children to learn English again, and to speak it for all scholarly purposes; and, if they use, instead, Greek or Latin, to use them only that they may be understood by Greeks or Latins; and not that they may mystify the illiterate many of their own land....