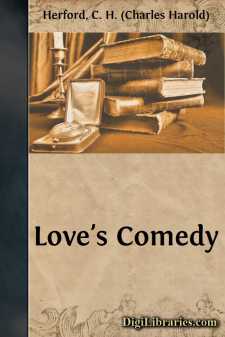 Koerlighedens Komedie was published at Christiania in 1862. The polite world—so far as such a thing existed at the time in the Northern capital—received it with an outburst of indignation now entirely easy to understand. It has indeed faults enough. The character-drawing is often crude, the action, though full of effective by-play, extremely slight, and the sensational climax has little relation to human nature as exhibited in Norway, or out of it, at that or any other time. But the sting lay in the unflattering veracity of the piece as a whole; in the merciless portrayal of the trivialities of persons, or classes, high in their own esteem; in the unexampled effrontery of bringing a clergyman upon the stage. All these have long since passed in Scandinavia, into the category of the things which people take with their Ibsen as a matter of course, and the play is welcomed with delight by every Scandinavian audience. But in 1862 the matter was serious, and Ibsen meant it to be so.

For they were years of ferment—those six or seven which intervened between his return to Christiania from Bergen in 1857, and his departure for Italy in 1864. As director of the newly founded "Norwegian Theatre," Ibsen was a prominent member of the little knot of brilliant young writers who led the nationalist revolt against Danish literary tradition, then still dominant in well-to-do, and especially in official Christiania. Well-to-do and official Christiania met the revolt with contempt. Under such conditions, the specific literary battle of the Norwegian with the Dane easily developed into the eternal warfare of youthful idealism with "respectability" and convention. Ibsen had already started work upon the greatest of his Norse Histories—The Pretenders. But history was for him little more than material for the illustration of modern problems; and he turned with zest from the task of breathing his own spirit into the stubborn mould of the thirteenth century, to hold up the satiric mirror to the suburban drawing-rooms of Christiania, and to the varied phenomena current there,—and in suburban drawing-rooms elsewhere,—under the name of Love.

Yet Love's Comedy is much more than a satire, and its exuberant humour has a bitter core; the laughter that rings through it is the harsh, implacable laughter of Carlyle. His criticism of commonplace love-making is at first sight harmless and ordinary enough. The ceremonial formalities of the continental Verlobung, the shrill raptures of aunts and cousins over the engaged pair, the satisfied smile of enterprising mater-familias as she reckons up the tale of daughters or of nieces safely married off under her auspices; or, again, the embarrassments incident to a prolonged Brautstand following a hasty wooing, the deadly effect of familiarity upon a shallow affection, and the anxious efforts to save the appearance of romance when its zest has departed—all these things had yielded such "comedy" as they possess to many others before Ibsen, and an Ibsen was not needed to evoke it....