Love Romances of the Aristocracy 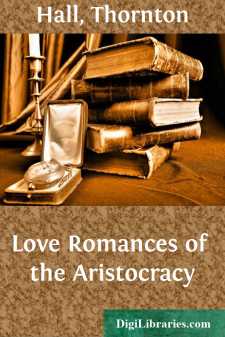 CHAPTER I A PRINCESS OF PRUDES

Among the many fair and frail women who fed the flames of the "Merrie Monarch's" passion from the first day of his restoration to that last day, but one short week before his death, when Evelyn saw him "sitting and toying with his concubines," there was, it is said, only one of them all who really captured his royal and wayward heart, that loveliest, simplest, and most designing of prudes, La belle Stuart.

When Barbara Villiers was enslaving Charles by her opulent charms, the queen of his many mistresses, Frances Stuart was growing to beautiful girlhood, an exile at the French Court, with no dream or care of her future conquest of a king. Her father, a son of Lord Blantyre, had carried his death-dealing sword through many a fight for the first Charles, a distant kinsman of his own; and, when the Stuart sun set in blood, had made good his escape to the friendly shores of France, where he had found a fresh field for his valour.

Meanwhile his daughter was happy in the charge of the widowed Queen Henrietta Maria, who although, as Cardinal de Retz tells us, she frequently "lacked a faggot to leave her bed in the Louvre," and even a crust to stay the pangs of hunger, proved a tender foster-mother to brave Walter Stuart's child, and watched her growth to beauty with a mother's pride.

Even before she emerged from short frocks, Frances Stuart had established herself as the pet par excellence of the Court of France. With Anne of Austria the little Scottish maiden was a prime favourite; every gallant, from "Monsieur" to the rakish Comte de Guise, loved to romp with her, and to join in her peals of childish laughter; and the King himself, Louis XIV., stole many a kiss, and was proud to be called her "big sweetheart." So devoted was His Majesty to La belle Ecossaise that, when her mother talked of taking her away to England, he begged that she would not remove so fair an ornament from his Court, and vowed that he would provide the child with a splendid dower and a noble husband if she would but allow her to remain.

But Madame Stuart had other designs for her pretty daughter; and when Henrietta Maria took boat to England to shine again at the Court of Whitehall, under her son's reign, Frances Stuart joined her retinue, and found herself transported from the schoolroom to the most brilliant and dangerous court in Europe. When this transformation came in her life Walter Stuart's daughter was just blossoming into as sweet and fragrant a flower as ever bloomed in woman's guise. Fair and graceful as a lily, with luxuriant brown hair, eyes of violet, and a proud, dainty little head, she had a figure which, although yet not fully formed, was faultless in its modelling and its exquisite grace. And these physical charms were allied to an unspoiled freshness, which combined the artless fascinations of the child with the allurements of the woman.

Such was Frances Stuart when she made her appearance at the Court of Charles II. as maid-of-honour, to his Queen, Catherine; and one can scarcely wonder that, even among the most beautiful women in England, the French "Mademoiselle," as she was called, was hailed as a new revelation of female fascination, especially as she brought with her the bubbling gaiety and passionate zest of life of the land of her exile.

To the "Merrie Monarch's" senses, sated with riper beauties and more stolid charms, this unspoiled child of nature was as a wild rose compared with exotic hot-house flowers. She was, he vowed, so "dainty, so fresh, so fragrant," that none but the sourest of anchorites could resist her—and he was no anchorite, as the world knew well. Almost at sight of her he fell madly in love with her, and brought to bear on her the battery of all his fascinations. Was ever maid placed, on the threshold of life, in so dangerous a predicament? For the King, who was her first lover, was also one of the most captivating men in England, a past-master in the conquest of woman....