Love of Life and Other Stories 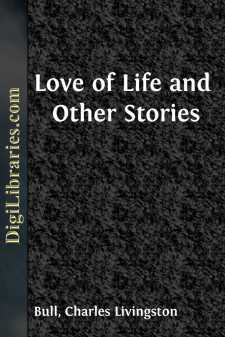 “This out of all will remain—   They have lived and have tossed:So much of the game will be gain,   Though the gold of the dice has been lost.”

They limped painfully down the bank, and once the foremost of the two men staggered among the rough-strewn rocks.  They were tired and weak, and their faces had the drawn expression of patience which comes of hardship long endured.  They were heavily burdened with blanket packs which were strapped to their shoulders.  Head-straps, passing across the forehead, helped support these packs.  Each man carried a rifle.  They walked in a stooped posture, the shoulders well forward, the head still farther forward, the eyes bent upon the ground.

“I wish we had just about two of them cartridges that’s layin’ in that cache of ourn,” said the second man.

His voice was utterly and drearily expressionless.  He spoke without enthusiasm; and the first man, limping into the milky stream that foamed over the rocks, vouchsafed no reply.

The other man followed at his heels.  They did not remove their foot-gear, though the water was icy cold—so cold that their ankles ached and their feet went numb.  In places the water dashed against their knees, and both men staggered for footing.

The man who followed slipped on a smooth boulder, nearly fell, but recovered himself with a violent effort, at the same time uttering a sharp exclamation of pain.  He seemed faint and dizzy and put out his free hand while he reeled, as though seeking support against the air.  When he had steadied himself he stepped forward, but reeled again and nearly fell.  Then he stood still and looked at the other man, who had never turned his head.

The man stood still for fully a minute, as though debating with himself.  Then he called out:

Bill staggered on through the milky water.  He did not look around.  The man watched him go, and though his face was expressionless as ever, his eyes were like the eyes of a wounded deer.

The other man limped up the farther bank and continued straight on without looking back.  The man in the stream watched him.  His lips trembled a little, so that the rough thatch of brown hair which covered them was visibly agitated.  His tongue even strayed out to moisten them.

It was the pleading cry of a strong man in distress, but Bill’s head did not turn.  The man watched him go, limping grotesquely and lurching forward with stammering gait up the slow slope toward the soft sky-line of the low-lying hill.  He watched him go till he passed over the crest and disappeared.  Then he turned his gaze and slowly took in the circle of the world that remained to him now that Bill was gone.

Near the horizon the sun was smouldering dimly, almost obscured by formless mists and vapors, which gave an impression of mass and density without outline or tangibility.  The man pulled out his watch, the while resting his weight on one leg.  It was four o’clock, and as the season was near the last of July or first of August,—he did not know the precise date within a week or two,—he knew that the sun roughly marked the northwest.  He looked to the south and knew that somewhere beyond those bleak hills lay the Great Bear Lake; also, he knew that in that direction the Arctic Circle cut its forbidding way across the Canadian Barrens.  This stream in which he stood was a feeder to the Coppermine River, which in turn flowed north and emptied into Coronation Gulf and the Arctic Ocean.  He had never been there, but he had seen it, once, on a Hudson Bay Company chart....