Love-Marriage-Birth Control Being a Speech delivered at the Church Congress at Birmingham, October, 1921 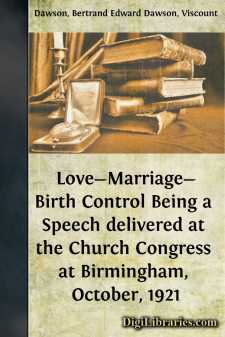 At the Church Congress held this autumn at Birmingham I was honoured by an invitation to speak on “Sexual Relationships.”

The subject-matter of that speech has aroused widespread interest and some controversy. It is being published in response to numerous requests and because most of the reports, being of necessity condensed, inadequately and even in some instances incorrectly set forth the views I endeavoured to champion; for any speech on a subject so difficult to handle needs to be read in its entirety if misapprehensions are to be avoided.

And first, may I thank numerous correspondents; and those in disagreement equally with those in agreement with me. One and all they bear testimony, if indeed such were needed, to how widespread and responsible is the interest on this question, and therefore to the wisdom of its full consideration. Amongst the letters are intimate human documents which pathetically disclose, as does professional experience, how frequently happiness is marred by ignorance of either the principles or the methods which should condition the true conception of sexual relationships.

I elected to deal with these relationships in their healthy rather than their morbid aspects, because the study of health is a sure way to lessen disease. Mere denunciations of evil serve but small purpose. The aim of statesmanship is rather to seek out causes and ponder over remedies, and prominent among remedies is surely the study of the significance and purport of sex love in a well-ordered and Christian community and provision for its healthy outlet. To this the first part of my speech was devoted. The view there upheld has brought forth a large measure of agreement and no reasoned disagreement.

The second part of my speech dealing with birth control (or what in strict accuracy should be called conception control) has aroused more controversy, but I venture to think that some, at least, of the criticism directed against my argument will disappear with a perusal of this full text of my speech. Therein will be found condemnation of infertile marriages and a strong plea that children are essential to the health and happiness of man and woman, are necessary to each other and of vital importance to the nation.

The difference between my critics and myself is not as to the vital necessity of the family following marriage, but rather this—they would like to see the large families prevalent fifty years ago restored (and where means and circumstances are favourable, such large families may be the source of much happiness); whereas under present-day conditions I should regard them as seldom attainable and desirable, and would favour smaller families of children born at predetermined intervals.

A married couple who have produced four children in twenty years cannot be said to have ignored the precept “be fruitful and multiply and replenish the earth” because they have so selected the times for the conceptions of their children as to enable them to give those children a better upbringing rather than have selfishly left the sequence of their offspring to blind chance.

The argument that the nation should foster large families in order more quickly to people the untenanted portions of the Empire, and so add to the strength and wealth of the British Dominions, requires serious attention, not in isolation, but in conjunction with other considerations, and calls forth varying opinions from economists.

On the other hand, emigration into foreign lands would seem to be a source of weakness to a nation. The feeding, clothing and educating of a young Briton cost the nation a definite sum of money, say, £400; if at the age of twenty, when he is ready to produce, that young Briton emigrates to a foreign state, he is a definite loss to the country of his birth and the country of his adoption is the gainer.

From another standpoint the criticism is made that I have not urged the paramount necessity of diminishing the population of these islands. With the economic soundness of this view others are better fitted to deal, but no economic considerations would outweigh the importance of child life inspiring the homes of the land, and if the number and sequence of children can be regulated by the parents’ circumstances, these homes will increase in number, will start when parents are younger and confer greater benefits alike on the family and the State....