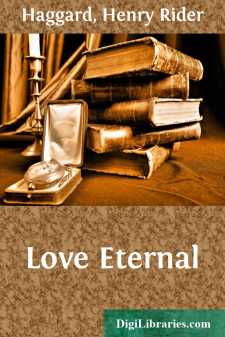 More than thirty years ago two atoms of the eternal Energy sped forth from the heart of it which we call God, and incarnated themselves in the human shapes that were destined to hold them for a while, as vases hold perfumes, or goblets wine, or as sparks of everlasting radium inhabit the bowels of the rock. Perhaps these two atoms, or essences, or monads indestructible, did but repeat an adventure, or many, many adventures. Perhaps again and again they had proceeded from that Home august and imperishable on certain mornings of the days of Time, to return thither at noon or nightfall, laden with the fruits of gained experience. So at least one of them seemed to tell the other before all was done and that other came to believe. If so, over what fields did they roam throughout the æons, they who having no end, could have no beginning? Not those of this world only, we may be sure. It is so small and there are so many others, millions upon millions of them, and such an infinite variety of knowledge is needed to shape the soul of man, even though it remain as yet imperfect and but a shadow of what it shall be.

Godfrey Knight was born the first, six months later she followed (her name was Isobel Blake), as though to search for him, or because whither he went, thither she must come, that being her doom and his.

Their circumstances, or rather those of their parents, were very different but, as it chanced, the houses in which they dwelt stood scarcely three hundred yards apart.

Between the rivers Blackwater and Crouch in Essex, is a great stretch of land, flat for the most part and rather dreary, which, however, to judge from what they have left us, our ancestors thought of much importance because of its situation, its trade and the corn it grew. So it came about that they built great houses there and reared beautiful abbeys and churches for the welfare of their souls. Amongst these, not very far from the coast, is that of Monk's Acre, still a beautiful fane though they be but few that worship there to-day. The old Abbey house adjacent is now the rectory. It has been greatly altered, and the outbuildings are shut up or used as granaries and so forth by arrangement with a neighbouring farmer. Still its grey walls contain some fine but rather unfurnished chambers, reputed by the vulgar to be haunted. It was for this reason, so says tradition, that the son of the original grantee of Monk's Acre Abbey, who bought it for a small sum from Henry VIII at the Dissolution of the Monasteries, turned the Abbey house into a rectory and went himself to dwell in another known as Hawk's Hall, situate on the bank of the little stream of that name, Hawk's Creek it is called, which finds its way to the Blackwater.

Parsons, he said, were better fitted to deal with ghosts than laymen, especially if the said laymen had dispossessed the originals of the ghosts of their earthly heritage.

The ancient Hawk's Hall, a timber building of the sort common in Essex as some of its premises still show, has long since disappeared....