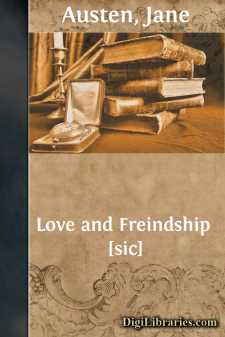 LETTER the FIRST From ISABEL to LAURA

How often, in answer to my repeated intreaties that you would give my Daughter a regular detail of the Misfortunes and Adventures of your Life, have you said "No, my freind never will I comply with your request till I may be no longer in Danger of again experiencing such dreadful ones."

Surely that time is now at hand. You are this day 55. If a woman may ever be said to be in safety from the determined Perseverance of disagreeable Lovers and the cruel Persecutions of obstinate Fathers, surely it must be at such a time of Life. Isabel

Altho' I cannot agree with you in supposing that I shall never again be exposed to Misfortunes as unmerited as those I have already experienced, yet to avoid the imputation of Obstinacy or ill-nature, I will gratify the curiosity of your daughter; and may the fortitude with which I have suffered the many afflictions of my past Life, prove to her a useful lesson for the support of those which may befall her in her own. Laura

As the Daughter of my most intimate freind I think you entitled to that knowledge of my unhappy story, which your Mother has so often solicited me to give you.

My Father was a native of Ireland and an inhabitant of Wales; my Mother was the natural Daughter of a Scotch Peer by an italian Opera-girl—I was born in Spain and received my Education at a Convent in France.

When I had reached my eighteenth Year I was recalled by my Parents to my paternal roof in Wales. Our mansion was situated in one of the most romantic parts of the Vale of Uske. Tho' my Charms are now considerably softened and somewhat impaired by the Misfortunes I have undergone, I was once beautiful. But lovely as I was the Graces of my Person were the least of my Perfections. Of every accomplishment accustomary to my sex, I was Mistress. When in the Convent, my progress had always exceeded my instructions, my Acquirements had been wonderfull for my age, and I had shortly surpassed my Masters.

In my Mind, every Virtue that could adorn it was centered; it was the Rendez-vous of every good Quality and of every noble sentiment.

A sensibility too tremblingly alive to every affliction of my Freinds, my Acquaintance and particularly to every affliction of my own, was my only fault, if a fault it could be called. Alas! how altered now! Tho' indeed my own Misfortunes do not make less impression on me than they ever did, yet now I never feel for those of an other. My accomplishments too, begin to fade—I can neither sing so well nor Dance so gracefully as I once did—and I have entirely forgot the MINUET DELA COUR. Adeiu. Laura.

Our neighbourhood was small, for it consisted only of your Mother. She may probably have already told you that being left by her Parents in indigent Circumstances she had retired into Wales on eoconomical motives. There it was our freindship first commenced. Isobel was then one and twenty. Tho' pleasing both in her Person and Manners (between ourselves) she never possessed the hundredth part of my Beauty or Accomplishments....