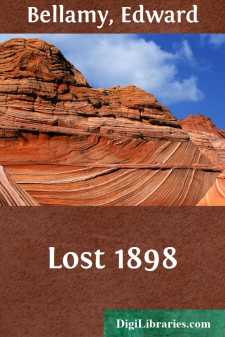 The 25th of May, 1866, was no doubt to many a quite indifferent date, but to two persons it was the saddest day of their lives. Charles Randall that day left Bonn, Germany, to catch the steamer home to America, and Ida Werner was left with a mountain of grief on her gentle bosom, which must be melted away drop by drop, in tears, before she could breathe freely again.

A year before, Randall, hunting for apartments, his last term at the university just begun, had seen the announcement, "Zimmer zu vermiethen," in the hall below the flat where the Werners lived. Ida answered his ring, for her father was still at his government office, and her mother had gone out to the market to buy the supper. She would much rather her mother had been at home to show the gentleman the rooms; but, knowing that they could not afford to lose a chance to rent them, she plucked up courage, and, candle in hand, showed him through the suite. When he came next day with his baggage, he learned for the first time what manner of apartments he had engaged; for although he had protracted the investigation the previous evening to the furthest corner, and had been most exacting as to explanations, he had really rented the rooms entirely on account of a certain light in which a set of Madonna features, in auburn hair, had shown at the first opening of the door.

A year had passed since this, and a week ago a letter from home had stated that his father, indignant at his unexplained stay six months beyond the end of his course, had sent him one last remittance, barely sufficient for a steamer ticket, with the intimation that if he did not return on a set day, he must thenceforth attend to his own exchequer. The 25th was the last day on which he could leave Bonn to catch the requisite steamer. Had it been in November, nature at least would have sympathized; it was cruel that their autumn time of separation should fall in the spring, when the sky is full of bounteous promise and the earth of blissful trust.

Love is so improvident that a parting a year away is no more feared than death, and a month's end seems dim and distant. But a week,—a week only,—that even to love is short, and the beginning of the end. The chilling mist that rose from the gulf of separation so near before them overshadowed all the brief remnant of their path. They were constantly together. But a silence had come upon them. Never had words seemed idler, they had so much to say. They could say nothing that did not mock the weight on their hearts, and seem trivial and impertinent because it was exclusive of more important matter. The utmost they could do was to lay their hearts open toward each other to receive every least impression of voice, and look, and manner, to be remembered afterward. At evening they went into the minster church, and, sitting in the shadows, listened to the sweet, shrill choir of boys whose music distilled the honey of sorrow; and as the deep bass organ chords gripped their hearts with the tones that underlie all weal and woe, they looked in each other's eyes, and did for a space feel so near that all the separation that could come after seemed but a trifling thing.

It was all arranged between them. He was to earn money, or get a position in business, and return in a year or two at most and bring her to America.

"Oh," she said once, "if I could but sleep till thou comest again to wake me, how blessed I should be; but, alas, I must wake all through the desolate time!"

Although for the most part she comforted him rather than he her, yet at times she gave way, and once suddenly turned to him and hid her face on his breast, and said, trembling with tearless sobs:—