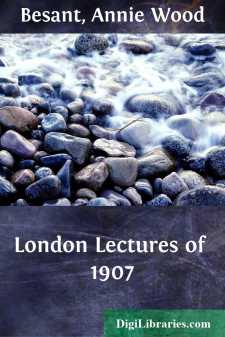 Our subject to-night consists of two words: psychism—spirituality. I am going to speak to you on the subjects denoted by these two words, because there is so much confusion about them in ordinary conversation, in ordinary literature, and out of that confusion much of harm arises. People think of one thing and use the name of the other, and so continually fall into blunders and mislead others with whom they talk. I want to-night to draw a sharp and intelligible division between psychism and spirituality; if possible, to explain very clearly what each of them means; so that, thoroughly understanding the meaning of the things, people may choose for themselves which of the two they desire to evolve, or unfold, within themselves. For if a person, desiring to unfold the spiritual nature, uses the means which are only adapted for developing the psychic nature, disappointment, possibly danger, will result; while, on the other hand, if a person desires to develop the psychic nature, and thinks that he will reach that development quickly by unfolding his spiritual powers, he also is equally doomed to disappointment; but in the second case, only to disappointment for a time. For while it is not true that the great psychic is necessarily a spiritual person, it is true that the great spiritual person is inevitably a psychic. All the powers of Nature are subject to the Spirit, and hence, when a man has truly unfolded his spiritual nature, there is nothing in the lower world which is not open to him and obedient to his will. In that sense, then, the man who follows the spiritual path will not ultimately be disappointed if he is seeking psychic development, but the very seeking for it will, on the spiritual path, act as a certain barrier. I shall return to the point again presently, and show you in what sense, and why, it is true that the development of the psychic powers may hinder the unfolding of the spiritual.

Now, to distinguish clearly between the two, I will begin with two brief definitions. They will be expanded naturally in the course of the lecture, but I will define each of these two words in a single sentence so as to make the definition clear and brief. Spirituality is the Self-realisation of the One; psychism is the manifestation of the powers of consciousness through organised matter. Each word of that definition has its own value. We are far too apt, in our ordinary thought and talking, to limit the words "psychical," "psychic," or "psychism" in a quite illegitimate way, and the popular use of the term is illegitimate. It is generally used amongst us to mean unusual manifestations of the powers of consciousness, whereas, properly speaking, the word ought to cover every outer manifestation of consciousness, whether on the physical, on the astral, on the mental, or on the budÌ£dÌ£hic plane. It does not matter in what world you are moving, in what matter your consciousness is acting; so long as it is utilising organised matter for its own expression so long are those manifestations psychic, and are properly included under the term psychism. You may perhaps wonder why I lay stress on this. You will see it at once if I remind you that unless we keep this definition in mind—accurate, legitimate as it is—we shall be making a division between the manifestation of the consciousness on the physical and on the astral and mental planes, between its manifestation in the physical and those in the astral and mental bodies; and if we do that the whole of our thought will be on mistaken lines. You need practically to be pressed back to what you know of consciousness on the physical plane, before you can thoroughly follow its manifestations on the astral and on the mental. If you try to separate off manifestations which are the same in kind though differing in degree, according to the fineness of the matter which is employed, if you try to separate them off, you will always regard what you call psychism—that is, astral and mental manifestations in the subtler bodies—in an artificial and unwise manner. If, on the other hand, you realise that consciousness is one, that its manifestation on any plane is conditioned by the matter of the plane, that it is one in essence, only varying in degree according to the lessening or the increase of the resistance of the matter of the planes, then you will not be inclined to take up exaggerated views with regard to what people are so fond of calling psychism....