Lobo, Rag and Vixen Being The Personal Histories Of Lobo, Redruff, Raggylug & Vixen 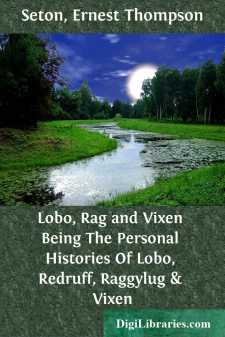 LOBO THE KING OF CURRUMPAW I

Currumpaw is a vast cattle range in northern New Mexico. It is a land of rich pastures and teeming flocks and herds, a land of rolling mesas and precious running waters that at length unite in the Currumpaw River, from which the whole region is named. And the king whose despotic power was felt over its entire extent was an old gray wolf.

Old Lobo, or the king, as the Mexicans called him, was the gigantic leader of a remarkable pack of gray wolves, that had ravaged the Currumpaw Valley for a number of years. All the shepherds and ranchmen knew him well, and, wherever he appeared with his trusty band, terror reigned supreme among the cattle, and wrath and despair among their owners. Old Lobo was a giant among wolves, and was cunning and strong in proportion to his size. His voice at night was well-known and easily distinguished from that of any of his fellows. An ordinary wolf might howl half the night about the herdsman's bivouac without attracting more than a passing notice, but when the deep roar of the old king came booming down the cañon, the watcher bestirred himself and prepared to learn in the morning that fresh and serious inroads had been made among the herds.

Old Lobo's band was but a small one. This I never quite understood, for usually, when a wolf rises to the position and power that he had, he attracts a numerous following. It may be that he had as many as he desired, or perhaps his ferocious temper prevented the increase of his pack. Certain is it that Lobo had only five followers during the latter part of his reign. Each of these, however, was a wolf of renown, most of them were above the ordinary size, one in particular, the second in command, was a veritable giant, but even he was far below the leader in size and prowess. Several of the band, besides the two leaders, were especially noted. One of those was a beautiful white wolf, that the Mexicans called Blanca; this was supposed to be a female, possibly Lobo's mate. Another was a yellow wolf of remarkable swiftness, which, according to current stories, had, on several occasions, captured an antelope for the pack.

It will be seen, then, that these wolves were thoroughly well-known to the cowboys and shepherds. They were frequently seen and oftener heard, and their lives were intimately associated with those of the cattlemen, who would so gladly have destroyed them. There was not a stockman on the Currumpaw who would not readily have given the value of many steers for the scalp of any one of Lobo's band, but they seemed to possess charmed lives, and defied all manner of devices to kill them. They scorned all hunters, derided all poisons, and continued, for at least five years, to exact their tribute from the Currumpaw ranchers to the extent, many said, of a cow each day. According to this estimate, therefore, the band had killed more than two thousand of the finest stock, for, as was only too well-known, they selected the best in every instance.

The old idea that a wolf was constantly in a starving state, and therefore ready to eat anything, was as far as possible from the truth in this case, for these freebooters were always sleek and well-conditioned, and were in fact most fastidious about what they ate....