Lives of the most Eminent Painters Sculptors and Architects Vol 10 (of 10) Bronzino to Vasari, & General Index. 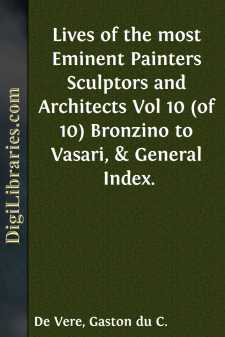 Having written hitherto of the lives and works of the most excellent painters, sculptors, and architects, from Cimabue down to the present day, who have passed to a better life, and having spoken with the opportunities that came to me of many still living, it now remains that I say something of the craftsmen of our Academy of Florence, of whom up to this point I have not had occasion to speak at sufficient length. And beginning with the oldest and most important, I shall speak first of Agnolo, called Bronzino, a Florentine painter truly most rare and worthy of all praise.

Agnolo, then, having been many years with Pontormo, as has been told, caught his manner so well, and so imitated his works, that their pictures have been taken very often one for the other, so similar they were for a time. And certainly it is a marvel how Bronzino learned the manner of Pontormo so well, for the reason that Jacopo was rather strange and shy than otherwise even with his dearest disciples, being such that he would never let anyone see his works save when completely finished. But notwithstanding this, so great were the patience and lovingness of Agnolo towards Pontormo, that he was forced always to look kindly upon him, and to love him as a son. The first works of account that Bronzino executed, while still a young man, were in the Certosa of Florence, over a door that leads from the great cloister into the chapter-house, on two arches, one within and the other without. On that without is a Pietà, with two Angels, in fresco, and on that within is a nude S. Laurence upon the gridiron, painted in oil-colours on the wall; which works were a good earnest of the excellence that has been seen since in the works of this painter in his mature years. In the Chapel of Lodovico Capponi, in S. Felicita at Florence, Bronzino, as has been said in another place, painted two Evangelists in two round pictures in oils, and on the vaulting he executed some figures in colour. In the Abbey of the Black Friars at Florence, in the upper cloister, he painted in fresco a story from the life of S. Benedict, when he throws himself naked on the thorns, which is a very good picture. In the garden of the Sisters called the Poverine, he painted in fresco a most beautiful tabernacle, wherein is Christ appearing to the Magdalene in the form of a gardener. And in S. Trinita, likewise in Florence, may be seen a picture in oils by the same hand, on the first pilaster at the right hand, of the Dead Christ, Our Lady, S. John, and S. Mary Magdalene, executed with much diligence and in a beautiful manner. And during that time when he executed these works, he also painted many portraits of various persons, and other pictures, which gave him a great name.

Then, the siege of Florence being ended and the settlement made, he went, as has been told elsewhere, to Pesaro, where under the protection of Guidobaldo, Duke of Urbino, besides the above-mentioned harpsichord-case full of figures, which was a rare thing, he executed the portrait of that lord and one of a daughter of Matteo Sofferoni, which was a truly beautiful picture and much extolled. He also executed at the Imperiale, a villa of the said Duke, some figures in oils on the spandrels of a vault; and more of these he would have done if he had not been recalled to Florence by his master, Jacopo Pontormo, that he might assist him to finish the Hall of Poggio a Caiano. And having arrived in Florence, he painted as it were by way of pastime, for Messer Giovanni de Statis, Auditor to Duke Alessandro, a little picture of Our Lady which was a much extolled work, and shortly afterwards, for Monsignor Giovio, his friend, the portrait of Andrea Doria; and for Bartolommeo Bettini, to fill certain lunettes in a chamber, the portraits of Dante, Petrarca, and Boccaccio, half-length figures of great beauty....