Lives of the Most Eminent Painters, Sculptors and Architects Vol. 09 (of 10) Michelagnolo to the Flemings 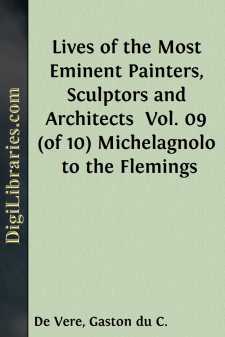 While the most noble and industrious spirits were striving, by the light of the famous Giotto and of his followers, to give to the world a proof of the ability that the benign influence of the stars and the proportionate admixture of humours had given to their intellects, and while, desirous to imitate with the excellence of their art the grandeur of Nature in order to approach as near as possible to that supreme knowledge that many call understanding, they were universally toiling, although in vain, the most benign Ruler of Heaven in His clemency turned His eyes to the earth, and, having perceived the infinite vanity of all those labours, the ardent studies without any fruit, and the presumptuous self-sufficiency of men, which is even further removed from truth than is darkness from light, and desiring to deliver us from such great errors, became minded to send down to earth a spirit with universal ability in every art and every profession, who might be able, working by himself alone, to show what manner of thing is the perfection of the art of design in executing the lines, contours, shadows, and high lights, so as to give relief to works of painting, and what it is to work with correct judgment in sculpture, and how in architecture it is possible to render habitations secure and commodious, healthy and cheerful, well-proportioned, and rich with varied ornaments. He was pleased, in addition, to endow him with the true moral philosophy and with the ornament of sweet poesy, to the end that the world might choose him and admire him as its highest exemplar in the life, works, saintliness of character, and every action of human creatures, and that he might be acclaimed by us as a being rather divine than human. And since He saw that in the practice of these rare exercises and arts—namely, in painting, in sculpture, and in architecture—the Tuscan intellects have always been exalted and raised high above all others, from their being diligent in the labours and studies of every faculty beyond no matter what other people of Italy, He chose to give him Florence, as worthy beyond all other cities, for his country, in order to bring all the talents to their highest perfection in her, as was her due, in the person of one of her citizens.

There was born a son, then, in the Casentino, in the year 1474, under a fateful and happy star, from an excellent and noble mother, to Lodovico di Leonardo Buonarroti Simoni, a descendant, so it is said, of the most noble and most ancient family of the Counts of Canossa. To that Lodovico, I say, who was in that year Podestà of the township of Chiusi and Caprese, near the Sasso della Vernia, where S. Francis received the Stigmata, in the Diocese of Arezzo, a son was born on the 6th of March, a Sunday, about the eighth hour of the night, to which son he gave the name Michelagnolo, because, inspired by some influence from above, and giving it no more thought, he wished to suggest that he was something celestial and divine beyond the use of mortals, as was afterwards seen from the figures of his horoscope, he having had Mercury and Venus in the second house of Jupiter, with happy augury, which showed that from the art of his brain and of his hand there would be seen to issue forth works marvellous and stupendous. Having finished his office as Podestà, Lodovico returned to Florence and settled in the village of Settignano, at a distance of three miles from the city, where he had a farm that had belonged to his forefathers; which place abounds with stone and is all full of quarries of grey-stone, which is constantly being worked by stone-cutters and sculptors, who for the most part are born in the place. Michelagnolo was put out to nurse by Lodovico in that village with the wife of a stone-cutter: wherefore the same Michelagnolo, discoursing once with Vasari, said to him jestingly, "Giorgio, if I have anything of the good in my brain, it has come from my being born in the pure air of your country of Arezzo, even as I also sucked in with my nurse's milk the chisels and hammer with which I make my figures." In time Lodovico's family increased, and, being in poor circumstances, with slender revenues, he set about apprenticing his sons to the Guilds of Silk and Wool. Michelagnolo, who by that time was well grown, was placed to be schooled in grammar with Maestro Francesco da Urbino; but, since his genius drew him to delight in design, all the time that he could snatch he would spend in drawing in secret, being scolded for this by his father and his other elders, and at times beaten, they perchance considering that to give attention to that art, which was not known by them, was a mean thing and not worthy of their ancient house.

At this time Michelagnolo had formed a friendship with Francesco Granacci, who, likewise a lad, had placed himself with Domenico Ghirlandajo in order to learn the art of painting; wherefore Granacci, loving Michelagnolo, and perceiving that he was much inclined to design, supplied him daily with drawings by Ghirlandajo, who at that time was reputed to be one of the best masters that there were not only in Florence, but throughout all Italy....