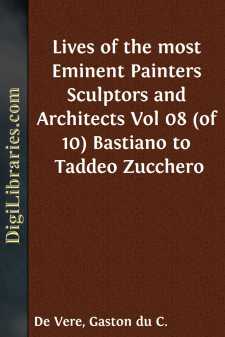 When Pietro Perugino, by that time an old man, was painting the altar-piece of the high-altar of the Servites at Florence, a nephew of Giuliano and Antonio da San Gallo, called Bastiano, was placed with him to learn the art of painting. But the boy had not been long with Perugino, when he saw the manner of Michelagnolo in the cartoon for the Hall, of which we have already spoken so many times, in the house of the Medici, and was so struck with admiration, that he would not return any more to Pietro's workshop, considering that his manner, beside that of Buonarroti, was dry, petty, and by no means worthy to be imitated. And since, among those who used to go to paint that cartoon, which was for a time the school of all who wished to attend to painting, the most able of all was held to be Ridolfo Ghirlandajo, Bastiano chose him as his companion, in order to learn colouring from him, and so they became fast friends. But not ceasing therefore to give his attention to that cartoon and to work at those nudes, Bastiano copied all together in a little cartoon the whole composition of that mass of figures, which not one of all those who had worked at it had ever drawn as a whole. And since he applied himself to it with all the earnestness that was in him, it proved that he was afterwards able on any occasion to render an account of the attitudes, muscles, and movements of those figures, and of the reasons that had caused Buonarroti to depict certain difficult postures; in doing which he would speak slowly and sententiously, with great gravity, so that a company of able craftsmen gave him the name of Aristotile, which, moreover, sat upon him all the better because it appeared that according to an ancient portrait of that supreme philosopher and confidant of Nature, Bastiano much resembled him.

But to return to the little cartoon drawn by Aristotile; he held it always so dear, that, after Buonarroti's original had perished, he would never let it go either at a price or on any other terms, or allow it to be copied; indeed, he would not show it, save only as a man shows precious things to his dearest friends, as a favour. Afterwards, in the year 1542, this drawing was copied in oils by Aristotile, at the persuasion of Giorgio Vasari, who was much his friend, in a picture in chiaroscuro, which was sent through Monsignor Giovio to King Francis of France, who held it very dear, and gave a handsome reward to San Gallo. This Vasari did in order that the memory of that work might be preserved, seeing that drawings perish very readily.

In his youth, then, Aristotile delighted, as the others of his house have done, in the matters of architecture, and he therefore gave his attention to measuring the ground-plans of buildings and with great diligence to the study of perspective; in doing which he was much assisted by a brother of his, called Giovan Francesco, who was employed as architect in the building of S. Pietro, under Giuliano Leno, the proveditor. Giovan Francesco, having drawn Aristotile to Rome, employed him to keep the accounts in a great business that he had of furnaces for lime and works in pozzolana and tufa, which brought him very large profits; and in this way Bastiano lived for a time, without doing anything but draw in the Chapel of Michelagnolo, and resort, by means of M. Giannozzo Pandolfini, Bishop of Troia, to the house of Raffaello da Urbino. After a time, Raffaello having made for that Bishop the design of a palace which he wished to erect in the Via di S. Gallo at Florence, the above-named Giovan Francesco was sent to put it into execution, which he did with all the diligence wherewith it is possible for such a work to be carried out. But in the year 1530, Giovan Francesco being dead, and the siege of Florence in progress, that work, as we shall relate, was left unfinished. Its completion was afterwards entrusted to his brother Aristotile, who, as will be told, had returned to Florence many and many a year before, after having amassed a large sum of money under the above-named Giuliano Leno, in the business that his brother had left him in Rome; with a part of which money Aristotile bought, at the persuasion of Luigi Alamanni and Zanobi Buondelmonte, who were much his friends, a site for a house behind the Convent of the Servites, near Andrea del Sarto, where, with the intention of taking a wife and living at leisure, he afterwards built a very commodious little house.

After returning to Florence, then, Aristotile, being much inclined to perspective, to which he had given his attention under Bramante in Rome, appeared to delight in scarcely any other thing; but nevertheless, besides executing a portrait or two from the life, he painted in oils, on two large canvases, the Eating of the Fruit by Adam and Eve and their Expulsion from Paradise, which he did after copies that he had made from the works painted by Michelagnolo on the vaulting of the Chapel in Rome....