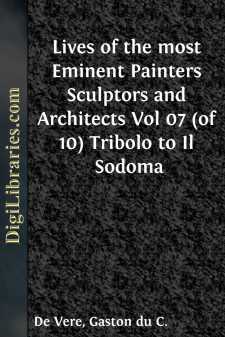 Raffaello the carpenter, surnamed Il Riccio de' Pericoli, who lived near the Canto a Monteloro in Florence, had born to him in the year 1500, as he used to tell me himself, a male child, whom he was pleased to call at baptism, like his own father, Niccolò; and having perceived that the boy had a quick and ready intelligence and a lofty spirit, he determined, although he was but a poor artisan, that he should begin straightway by learning to read and write well and cast accounts. Sending him to school, therefore, it came about, since the child was very vivacious and so high-spirited in his every action, that he was always cramped for room and was a very devil both among the other boys at school and everywhere else, always teasing and tormenting both himself and others, that he lost his own name of Niccolò and acquired that of Tribolo to such purpose, that he was called that ever afterwards by everyone.

Now, Tribolo growing, his father, in order both to make use of him and to curb the boy's exuberance, took him into his workshop and taught him his own trade; but having seen in a few months that he was ill suited for such a calling, being somewhat delicate, thin, and feeble in health, he came to the conclusion that if he wished to keep him alive, he must release him from the heavier labours of his craft and set him to wood-carving. Having heard that without design, the father of all the arts, the boy could not become an excellent master therein, Raffaello resolved that he should begin by devoting all his time to design, and therefore made him draw now cornices, foliage, and grotesques, and now other things necessary to such a profession. And having seen that in doing this the boy was well served both by his head and by his hand, and reflecting, like a man of judgment, that with him Niccolò could at best learn nothing else but to work by the square, Raffaello first spoke of this with the carpenter Ciappino, who was the very familiar friend of Nanni Unghero; and with his advice and assistance, he placed Niccolò for three years with the said Nanni, in whose workshop, where both joiner's work and carving were done, there were constantly to be found the sculptor Jacopo Sansovino, the painter Andrea del Sarto, and others, who afterwards became such able masters. Now Nanni, who had in those days a passing good reputation for excellence, was executing many works both in joinery and in carving for the villa of Zanobi Bartolini at Rovezzano, without the Porta alla Croce, for the palace of the Bartolini, which Giovanni, the brother of that Zanobi, was having built at that time on the Piazza di S. Trinita, and for the house and garden of the same man in Gualfonda; and Tribolo, who was made to work by Nanni without discretion, always having to handle saws, planes, and other common tools, and not being capable, by reason of the feebleness of his body, of such exertions, began to feel dissatisfied and to say to Riccio, when he asked for the cause of his discontent, that he did not think that he could remain with Nanni in that craft, and that therefore Raffaello should see to placing him with Andrea del Sarto or Jacopo Sansovino, whom he had come to know in Unghero's workshop, for the reason that with one or the other of them he hoped to do better and to be sounder in health. Moved by these reasons, then, and again with the advice and assistance of Ciappino, Riccio placed Tribolo with Jacopo Sansovino, who took him willingly, because he had known him in the workshop of Nanni Unghero, and had seen that he worked well in design and even better in relief.

Jacopo Sansovino, when Tribolo, now restored to health, went to work under him, was executing in the Office of Works of S. Maria del Fiore, in competition with Benedetto da Rovezzano, Andrea da Fiesole, and Baccio Bandinelli, the marble statue of S....