Lives of the most Eminent Painters Sculptors and Architects Vol. 06 (of 10) Fra Giocondo to Niccolo Soggi 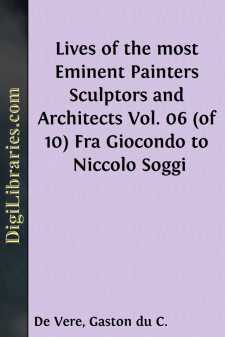 If writers of history were to live a few years longer than the number commonly granted as the span of human life, I, for my part, have no manner of doubt that they would have something to add to the accounts of the past previously written by them, for the reason that, even as it is not possible for a single man, be he ever so diligent, to learn the exact truth in a flash, or to discover all the details of his subject in the little time at his command, so it is as clear as the light of day that Time, who is said to be the father of truth, is always revealing new things every day to the seeker after knowledge. If, many years ago, when I first wrote and also published these Lives of the Painters and other Craftsmen, I had possessed that full information which I have since received concerning Fra Giocondo of Verona, a man of rare parts and a master of all the most noble faculties, I would without a doubt have made that honourable record of him which I am now about to make for the benefit of craftsmen, or rather, of the world; and not of him only, but also of many other masters of Verona, who have been truly excellent. And let no one marvel that I place them all under the image of one only, because, not having been able to obtain portraits of them all, I am forced to do this; but, so far as in me lies, not one of them shall thereby have his excellence defrauded of its due.

Now, since the order of time and merit so demands, I shall speak first of Fra Giocondo. This man, when he assumed the habit of S. Dominic, was called not simply Fra Giocondo, but Fra Giovanni Giocondo. How the name Giovanni dropped from him I know not, but I do know that he was always called Fra Giocondo by everyone. And although his chief profession was that of letters, and he was not only a very good philosopher and theologian, but also an excellent Greek scholar (which was a rare thing at that time, when learning and letters were just beginning to revive in Italy), nevertheless he was also a very fine architect, being a man who always took supreme delight in that art, as Scaliger relates in his epistle against Cardan, and the learned Budé in his book "De Asse," and in the observations that he wrote on the Pandects.

Fra Giocondo, then, who was a fine scholar, a capable architect, and an excellent master of perspective, spent many years near the person of the Emperor Maximilian, and was master in the Greek and Latin tongues to the learned Scaliger, who writes that he heard him dispute with profound learning on matters of the greatest subtlety before the same Maximilian. It is related by persons still living, who remember the facts very clearly, that at the time when Verona was under the power of that Emperor the bridge which is called the Ponte della Pietra, in that city, was being restored, and it was seen to be necessary to refound the central pier, which had been destroyed many times in the past, and Fra Giocondo gave the design for refounding it, and also for safeguarding it in such a manner that it might never be destroyed again. His method of safeguarding it was as follows: he gave orders that the pier should be kept always bound together with long double piles fixed below the water on every side, to the end that these might so protect it that the river should not be able to undermine it; for the place where it is built is in the main current of the river, the bed of which is so soft that no solid ground can be found on which to lay its foundations. And excellent, in truth, as is evident from the result, was the advice of Fra Giocondo, for the reason that the pier has stood firm from that time to our own, as it still does, without ever showing a crack; and there is hope that, by the observation of the suggestions given by that good monk, it will stand for ever.

In his youth Fra Giocondo spent many years in Rome, giving his attention to the study of antiquities, and not of buildings only, but also of the ancient inscriptions that are in the tombs, and the other relics of antiquity, both in Rome itself and its neighbourhood, and in every part of Italy; and he collected all these inscriptions and memorials into a most beautiful book, which he sent as a present, according to the account of the citizens of Verona mentioned above, to the elder Lorenzo de' Medici, the Magnificent, to whom, by reason of the great friendliness and favour that he showed to all men of talent, both Fra Giocondo and Domizio Calderino, his companion and compatriot, were always most deeply devoted....