Lives of the Most Eminent Painters Sculptors and Architects Vol. 05 ( of 10) Andrea da Fiesole to Lorenzo Lotto 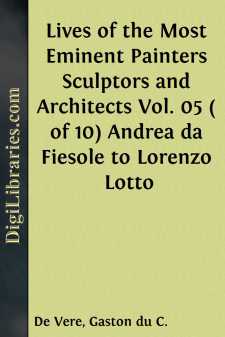 Seeing that it is no less necessary for sculptors to have mastery over their carving-tools than it is for him who practises painting to be able to handle colours, it therefore happens that many who work very well in clay prove to be unable to carry their labours to any sort of perfection in marble; and some, on the contrary, work very well in marble, without having any more knowledge of design than a certain instinct for a good manner, I know not what, that they have in their minds, derived from the imitation of certain things which please their judgment, and which their imagination absorbs and proceeds to use for its own purposes. And it is almost a marvel to see the manner in which some sculptors, without in any way knowing how to draw on paper, nevertheless bring their works to a fine and praiseworthy completion with their chisels. This was seen in Andrea, a sculptor of Fiesole, the son of Piero di Marco Ferrucci, who learnt the rudiments of sculpture in his earliest boyhood from Francesco di Simone Ferrucci, another sculptor of Fiesole. And although at the beginning he learnt only to carve foliage, yet little by little he became so well practised in his work that it was not long before he set himself to making figures; insomuch that, having a swift and resolute hand, he executed his works in marble rather with a certain judgment and skill derived from nature than with any knowledge of design. Nevertheless, he afterwards gave a little more attention to art, when, in the flower of his youth, he followed Michele Maini, likewise a sculptor of Fiesole; which Michele made the S. Sebastian of marble in the Minerva at Rome, which was so much praised in those days.

Andrea, then, having been summoned to work at Imola, built a chapel of grey-stone, which was much extolled, in the Innocenti in that city. After that work, he went to Naples at the invitation of Antonio di Giorgio of Settignano, a very eminent engineer, and architect to King Ferrante, with whom Antonio was in such credit, that he had charge not only of all the buildings in that kingdom, but also of all the most important affairs of State. On arriving in Naples, Andrea was set to work, and he executed many things for that King in the Castello di San Martino and in other parts of that city. Now Antonio died; and after the King had caused him to be buried with obsequies suited rather to a royal person than to an architect, and with twenty pairs of mourners following him to the grave, Andrea, recognizing that this was no country for him, departed from Naples and made his way back to Rome, where he stayed for some time, attending to the studies of his art, and also to some work.

Afterwards, having returned to Tuscany, he built the marble chapel containing the baptismal font in the Church of S. Jacopo at Pistoia, and with much diligence executed the basin of that font, with all its ornamentation. And on the main wall of the chapel he made two lifesize figures in half-relief—namely, S. John baptizing Christ, a work executed very well and with a beautiful manner. At the same time he made some other little works, of which there is no need to make mention. I must say, indeed, that although these things were wrought by Andrea rather with the skill of his hand than with art, yet there may be perceived in them a boldness and an excellence of taste worthy of great praise. And, in truth, if such craftsmen had a thorough knowledge of design united to their practised skill and judgment, they would vanquish in excellence those who, drawing perfectly, only hack the marble when they set themselves to work it, and toil at it painfully with a sorry result, through not having practice and not knowing how to handle the tools with the skill that is necessary.

After these works, Andrea executed a marble panel that was placed exactly between the two flights of steps that ascend to the upper choir in the Church of the Vescovado at Fiesole; in which panel he made three figures in the round and some scenes in low-relief. And for S. Girolamo, at Fiesole, he made the little marble panel that is built into the middle of the church. Having come into repute by reason of the fame of these works, Andrea was commissioned by the Wardens of Works of S. Maria del Fiore, at the time when Cardinal Giulio de' Medici was governing Florence, to make a statue of an Apostle four braccia in height; at that time, I mean, when four other similar statues were allotted at one and the same moment to four other masters—one to Benedetto da Maiano, another to Jacopo Sansovino, a third to Baccio Bandinelli, and the fourth to Michelagnolo Buonarroti; which statues were eventually to be twelve in number, and were to be placed in that part of that magnificent temple where there are the Apostles painted by the hand of Lorenzo di Bicci....