Lives of the Most Eminent Painters Sculptors and Architects Vol. 04 (of 10), Filippino Lippi to Domenico Puligo 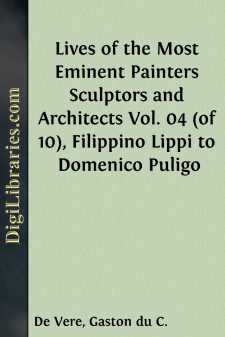 There was at this same time in Florence a painter of most beautiful intelligence and most lovely invention, namely, Filippo, son of Fra Filippo of the Carmine, who, following in the steps of his dead father in the art of painting, was brought up and instructed, being still very young, by Sandro Botticelli, notwithstanding that his father had commended him on his death-bed to Fra Diamante, who was much his friend—nay, almost his brother. Such was the intelligence of Filippo, and so abundant his invention in painting, and so bizarre and new were his ornaments, that he was the first who showed to the moderns the new method of giving variety to vestments, and embellished and adorned his figures with the girt-up garments of antiquity. He was also the first to bring to light grotesques, in imitation of the antique, and he executed them on friezes in terretta or in colours, with more design and grace than the men before him had shown; wherefore it was a marvellous thing to see the strange fancies that he expressed in painting. What is more, he never executed a single work in which he did not avail himself with great diligence of Roman antiquities, such as vases, buskins, trophies, banners, helmet-crests, adornments of temples, ornamental head-dresses, strange kinds of draperies, armour, scimitars, swords, togas, mantles, and such a variety of other beautiful things, that we owe him a very great and perpetual obligation, seeing that he added beauty and adornment to art in this respect.

In his earliest youth he completed the Chapel of the Brancacci in the Carmine at Florence, begun by Masolino, and left not wholly finished by Masaccio on account of his death. Filippo, therefore, gave it its final perfection with his own hand, and executed what was lacking in one scene, wherein S. Peter and S. Paul are restoring to life the nephew of the Emperor. In the nude figure of this boy he portrayed the painter Francesco Granacci, then a youth; and he also made portraits of the Chevalier, Messer Tommaso Soderini, Piero Guicciardini, father of Messer Francesco the historian, Piero del Pugliese, and the poet Luigi Pulci; likewise Antonio Pollaiuolo, and himself as a youth, as he then was, which he never did again throughout the whole of his life, so that it has not been possible to find a portrait of him at a more mature age. In the scene following this he portrayed Sandro Botticelli, his master, and many other friends and people of importance; among others, the broker Raggio, a man of great intelligence and wit, who executed in relief on a conch the whole Inferno of Dante, with all the circles and divisions of the pits and the nethermost well in their exact proportions, and all the figures and details that were most ingeniously imagined and described by that great poet; which conch was held in those times to be a marvellous thing.

Next, in the Chapel of Francesco del Pugliese at Campora, a seat of the Monks of the Badia, without Florence, he painted a panel in distemper of S. Bernard, to whom Our Lady is appearing with certain angels, while he is writing in a wood; which picture is held to be admirable in certain respects, such as rocks, books, herbage, and similar things, that he painted therein, besides the portrait from life of Francesco himself, so excellent that he seems to lack nothing save speech. This panel was removed from that place on account of the siege, and placed for safety in the Sacristy of the Badia of Florence. In S. Spirito in the same city, for Tanai de' Nerli, he painted a panel with Our Lady, S. Martin, S. Nicholas, and S. Catherine; with a panel in the Chapel of the Rucellai in S. Pancrazio, and a Crucifix and two figures on a ground of gold in S. Raffaello. In front of the Sacristy of S. Francesco, without the Porta a S. Miniato, he made a God the Father, with a number of children. At Palco, a seat of the Frati del Zoccolo, without Prato, he painted a panel; and in the Audience Chamber of the Priori in that territory he executed a little panel containing the Madonna, S. Stephen, and S. John the Baptist, which has been much extolled. On the Canto al Mercatale, also in Prato, in a shrine opposite to the Nuns of S. Margherita, and near some houses belonging to them, he painted in fresco a very beautiful Madonna, with a choir of seraphim, on a ground of dazzling light. In this work, among other things, he showed art and beautiful judgment in a dragon that is at the feet of S. Margaret, which is so strange and horrible, that it is revealed to us as a true fount of venom, fire, and death; and the whole of the rest of the work is so fresh and vivacious in colouring, that it deserves infinite praise....