Lives of the Most Eminent Painters Sculptors and Architects Vol. 01 (of 10), Cimabue to Agnolo Gaddi 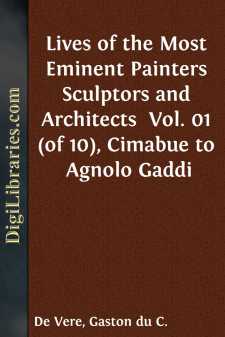 TRANSLATOR'S PREFACE TO THIS EDITION

Vasari introduces himself sufficiently in his own prefaces and introduction; a translator need concern himself only with the system by which the Italian text can best be rendered in English. The style of that text is sometimes laboured and pompous; it is often ungrammatical. But the narrative is generally lively, full of neat phrases, and abounding in quaint expressions—many of them still recognizable in the modern Florentine vernacular—while, in such Lives as those of Giotto, Leonardo da Vinci, and Michelagnolo, Vasari shows how well he can rise to a fine subject. His criticism is generally sound, solid, and direct; and he employs few technical terms, except in connection with architecture, where we find passages full of technicalities, often so loosely used that it is difficult to be sure of their exact meaning. In such cases I have invariably adopted the rendering which seemed most in accordance with Vasari's actual words, so far as these could be explained by professional advice and local knowledge; and I have included brief notes where they appeared to be indispensable.

In Mrs. Foster's familiar English paraphrase—for a paraphrase it is rather than a translation—all Vasari's liveliness evaporates, even where his meaning is not blurred or misunderstood. Perhaps I have gone too far towards the other extreme in relying upon the Anglo-Saxon side of the English language rather than upon the Latin, and in taking no liberties whatever with the text of 1568. My intention, indeed, has been to render my original word for word, and to err, if at all, in favour of literalness. The very structure of Vasari's sentences has usually been retained, though some freedom was necessary in the matter of the punctuation, which is generally bewildering. As Mr. Horne's only too rare translation of the Life of Leonardo da Vinci has proved, it is by some such method that we can best keep Vasari's sense and Vasari's spirit—the one as important to the student of Italian art as is the other to the general reader. Such an attempt, however, places an English translator of the first volume at a conspicuous disadvantage. Throughout the earlier Lives Vasari seems to be feeling his way. He is not sure of himself, and his style is often awkward. The more faithful the attempted rendering, the more plainly must that awkwardness be reproduced.

Vasari's Introduction on Technique has not been included, because it has no immediate connection with the Lives. In any case, there already exists an adequate translation by Miss Maclehose. All Vasari's other prefaces and introductions are given in the order in which they are found in the edition of 1568.

With this much explanation, I may pass to personal matters, and record my thanks to many Florentine friends for help in technical and grammatical questions; to Professor Baldwin Brown for the notes on technical matters printed with Miss Maclehose's translation of "Vasari on Technique"; and to Mr. C. J. Holmes, of the National Portrait Gallery, for encouragement in a task which has proved no less pleasant than difficult.

TO THE MOST ILLUSTRIOUS AND MOST EXCELLENT SIGNOR COSIMO DE' MEDICI, DUKE OF FLORENCE

My most honoured Lord,

Seeing that your Excellency, following in this the footsteps of your most Illustrious ancestors, and incited and urged by your own natural magnanimity, ceases not to favour and to exalt every kind of talent, wheresoever it may be found, and shows particular favour to the arts of design, fondness for their craftsmen, and understanding and delight in their beautiful and rare works; I think that you cannot but take pleasure in this labour which I have undertaken, of writing down the lives, the works, the manners, and the circumstances of all those who, finding the arts already dead, first revived them, then step by step nourished and adorned them, and finally brought them to that height of beauty and majesty whereon they stand at the present day. And because these masters have been almost all Tuscans, and most of these Florentines, of whom many have been incited and aided by your most Illustrious ancestors with every kind of reward and honour to put themselves to work, it may be said that in your state, nay, in your most blessed house the arts were born anew, and that through the generosity of your ancestors the world has recovered these most beautiful arts, through which it has been ennobled and embellished.

Wherefore, through the debt which this age, these arts, and these craftsmen owe to your ancestors, and to you as the heir of their virtue and of their patronage of these professions, and through that debt which I, above all, owe them, seeing that I was taught by them, that I was their subject and their devoted servant, that I was brought up under Cardinal Ippolito de' Medici, and under Alessandro, your predecessor, and that, finally, I am infinitely attached to the blessed memory of the Magnificent Ottaviano de' Medici, by whom I was supported, loved and protected while he lived; for all these reasons, I say, and because from the greatness of your worth and of your fortunes there will come much favour for this work, and from your understanding of its subject there will come a better appreciation than from any other for its usefulness and for the labour and the diligence that I have given to its execution, it has seemed to me that to your Excellency alone could it be fittingly dedicated, and it is under your most honoured name that I have wished it to come to the hands of men....