Lives of the Engineers The Locomotive. George and Robert Stephenson 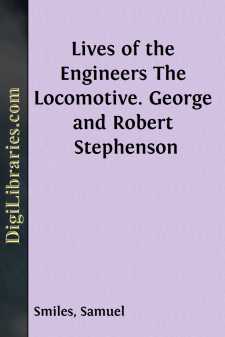 Since the appearance of this book in its original form, some seventeen years since, the construction of Railways has continued to make extraordinary progress.  Although Great Britain, first in the field, had then, after about twenty-five years’ work, expended nearly 300 millions sterling in the construction of 8300 miles of railway, it has, during the last seventeen years, expended about 288 millions more in constructing 7780 additional miles.

But the construction of railways has proceeded with equal rapidity on the Continent.  France, Germany, Spain, Sweden, Belgium, Switzerland, Holland, have largely added to their railway mileage.  Austria is actively engaged in carrying new lines across the plains of Hungary, which Turkey is preparing to meet by lines carried up the valley of the Lower Danube.  Russia is also occupied with extensive schemes for connecting Petersburg and Moscow with her ports in the Black Sea on the one hand, and with the frontier towns of her Asiatic empire on the other.

Italy is employing her new-born liberty in vigorously extending railways throughout her dominions.  A direct line of communication has already been opened between France and Italy, through the Mont Cenis Tunnel; while another has been opened between Germany and Italy through the Brenner Pass,—so that the entire journey may now be made by two different railway routes (excepting only the short sea-passage across the English Channel) from London to Brindisi, situated in the south-eastern extremity of the Italian peninsula.

During the last sixteen years, nearly the whole of the Indian railways have been made.  When Edmund Burke, in 1783, arraigned the British Government for their neglect of India in his speech on Mr. Fox’s Bill, he said: “England has built no bridges, made no high roads, cut no navigations, dug out no reservoirs. . . .  Were we to be driven out of India this day, nothing would remain to tell that it had been possessed, during the inglorious period of our dominion, by anything better than the ourang-outang or the tiger.”

But that reproach no longer exists.  Some of the greatest bridges erected in modern times—such as those over the Sone near Patna, and over the Jumna at Allahabad—have been erected in connection with the Indian railways.  More than 5000 miles are now at work, and they have been constructed at an expenditure of about £88,000,000 of British capital, guaranteed by the British Government.  The Indian railways connect the capitals of the three Presidencies—uniting Bombay with Madras on the south, and with Calcutta on the north-east—while a great main line, 2200 miles in extent, passing through the north-western provinces, and connecting Calcutta with Lucknow, Delhi, Lahore, Moultan, and Kurrachee, unites the mouths of the Hooghly in the Bay of Bengal with those of the Indus in the Arabian Sea.

When the first edition of this work appeared, in the beginning of 1857, the Canadian system of railways was but in its infancy.  The Grand Trunk was only begun, and the Victoria Bridge—the greatest of all railway structures—was not half erected.  The Colony of Canada has now more than 3000 miles in active operation along the great valley of the St. Lawrence, connecting Rivière du Loup at the mouth of that river, and the harbour of Portland in the State of Maine, viâ Montreal and Toronto, with Sarnia on Lake Huron, and with Windsor, opposite Detroit in the State of Michigan.  During the same time the Australian Colonies have been actively engaged in providing themselves with railways, many of which are at work, and others are in course of formation.  The Cape of Good Hope has several lines open, and others making.  France has constructed about 400 miles in Algeria; while the Pasha of Egypt is the proprietor of 360 miles in operation across the Egyptian desert.  The Japanese are also making railroads....