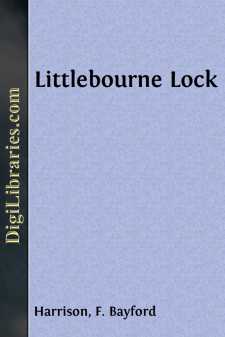 he mist of a July morning shrouded the river and its banks. It was a soft thin mist, not at all like a winter fog, and through it, and high above it, the sun was shining, and the larks singing; and Edward Rowles, the lock-keeper, knew well that within an hour or two the brightest sunshine would gladden England's river Thames.

He came out from his house, which was overgrown with honeysuckle and clematis, and he looked up the stream and down the stream, and then at the weir over which the water tumbled and roared; he saw that everything was all right after its night's rest. So he put his hands in his pockets, and went round to the back of the house to see how his peas and beans were conducting themselves. They were flourishing. Next he looked at some poultry in a wired-off space; they seemed very glad to see him, even the little chickens having good appetites, and being ready for their breakfasts.

After this inspection Edward Rowles went indoors again, and looked at his son Philip, who was still asleep in his little camp-bed in the corner of the sitting-room.

Philip opened his eyes and rubbed them, and within a few minutes was washing and dressing.

In the meantime Mrs. Rowles was lighting the fire in the kitchen, filling the kettle with water from the well, getting down bread and butter from a shelf, and preparing everything for the morning meal.

Presently there appeared a little girl, Emily by name, who slept in a tiny attic all by herself, and who was very slow in dressing, and generally late in coming down.

"Come, bustle about, Emily," said her mother. "Here, this slice of bread is very dry, so toast it, and then it will be extra nice."

Emily obeyed. Philip got a broom and swept out the kitchen; Mr. Rowles brought in a handful of mustard-and-cress as a relish for bread-and-butter. And soon they were all seated at the table.

"It is early yet," replied his wife; "wait until the first train from London comes in."

"Like enough there will be folks come by it," rejoined Rowles; "they must be precious glad to get out of London this hot day."

"Why must they be glad, father?" asked Philip.

"Because London is awful hot in hot weather; it seems as if it had not got enough air for all the folks to breathe that live in it. Millions of people, Philip. Write down a million on your slate, boy."

"Write it over again, and twice more. Now that seems a good many, eh? Well, there are more people in London than all those millions on your slate. What do you think of that?"

"Mother," said Emily, "does Aunt Mary live in London? And Albert and Juliet and Florry and Neddy—and—and all the others."