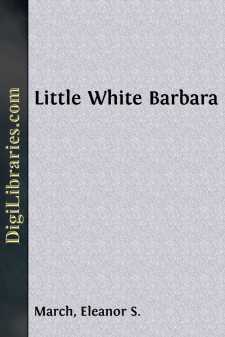 She lived with her two aunts, Aunt Dosy and Aunt Posy.

This is Aunt Dosy.

This is Aunt Posy.

They were very kind to her. All day long they used to talk about what she ought to do to get fat and rosy.

And Aunt Posy rubbed her cheeks with a rough towel to make them red.

If it was raining they made her sit indoors all day by the fire.

And if it was hot they fanned her all day long to keep her cool.

But still she only got paler and paler,

Until at last she almost faded away, and you could only see her by looking through a telescope.

And then Aunt Dosy and Aunt Posy began to cry and say, “Oh, dear, what shall we do!”

They cried so hard that their caps fell off, and then they said: “We will send for Dr. Funnyman.”

When Dr. Funnyman came he looked at Little White Barbara through an eye-glass and a magnifying glass and an opera-glass and a telescope, and then he said to Aunt Dosy and Aunt Posy: “You must go to London and buy her some Laughing Medicine. I will send her something to do her good till you come back.”

So Aunt Dosy and Aunt Posy went to London to buy the Laughing Medicine. And the Doctor sent Barbara—what do you think?—not a bottle of medicine, but

His naughty little boy Tommy to play with her.

Tommy looked very funny. He had a frog in one pocket and a guinea-pig in the other, and directly Barbara saw him

She began to laugh.

And she laughed and laughed, and all the time

And then Tommy showed her how to climb trees, but

She fell down, and then she began to laugh so much that

This time she got so fat, all the buttons came off the back of her frock.

Then they ran races round the garden till Barbara’s cheeks got quite red, and

Tommy showed her how to play leap-frog, and she was so hungry at tea-time that

When Aunt Dosy and Aunt Posy came back from London,—where they could not find any Laughing Medicine in any of the shops,—

They found Little White Barbara quite rosy and fat, and they were so happy.

And she was never called Little White Barbara any more.

18. Little White Barbara The Dumpy Books for Children CLOTH, ROYAL 32mo, 1/6 EACH I.

The Flamp, the Ameliorator, and the Schoolboy’s Apprentice. By E. V. Lucas.

The Bad Family. By Mrs. Fenwick.

The Story of Little Black Sambo. Illustrated in Colours. By Helen Bannerman.

The Bountiful Lady. By Thomas Cobb.

A Flower Book. Illustrated in Colours by Nellie Benson. Text by Eden Coybee.

The Pink Knight. Illustrated in Colours by J. R. Monsell.

The Little Clown. By Thomas Cobb.

A Horse Book. Illustrated in Colours....