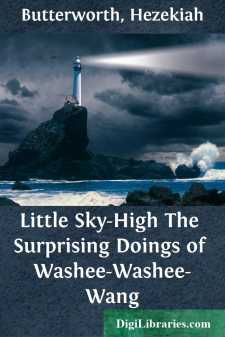 The children came home from school—Charles and Lucy.

"I have a surprise for you in the kitchen," said their mother, Mrs. Van Buren. "No, take off your things first, then you may go down and see. Now don't laugh—a laugh that hurts anyone's feelings is so unkind—tip-toe too! No, Charlie, one at a time; let Lucy go first."

Lucy tip-toed with eyes full of wonder to the dark banister-stairs that led down to the quarters below. Her light feet were as still as a little mouse's in a cheese closet. Presently she came back with dancing eyes.

"Oh, mother! where did you get him? His eyes are like two almonds, and his braided hair dangles away down almost to the floor, and there are black silk tassels on the end of it, and kitty is playing with them; and when Norah caught my eye she bent over double to laugh, but he kept right on shelling peas. Charlie, come and see; let me go with Charlie, mother?"

Charlie followed Lucy, tip-toeing to the foot of the banister, where a platform-stair commanded a view of the kitchen.

It was a very nice kitchen, with gas, hot water and cold, ranges and gas-stoves, and two great cupboards with glass doors through which all sorts of beautiful serving-dishes shone. Green ivies filled the window-cases, and geraniums lined the window-sills. A fine old parrot from the Andes inhabited a large cage with an open door, hanging over the main window, where the wire netting let in the air from the apple boughs.

On reaching the platform-stair, Charlie was as astonished as Lucy could wish.

There sat a little Chinese boy, as it seemed, although at second glance he looked rather old for a boy. He wore blue clothes and was shelling peas. His glossy black "pigtail" reached down to the floor, and the kitten was trying to raise the end of it in her pretty white paws. As Lucy had said, heavy black silk cords were braided in with the hair, with handsome tassels.

The parrot had come out of her cage, and was eying the boy and the kitten, plainly hoping for mischief. Suddenly she caught Charlie's eye, and with a flap of her wings she cried out to him.

The bird had heard Irish Nora say this a number of times during the day and had learned the words. Charlie could not help laughing out in response. With this encouragement Polly came down towards the door of the cage, and thrust her green and yellow head out into the room. "Now, isn't he, sure?" cried she, in Nora's own voice.

Nora was sole ruler of this cheerful realm below stairs; the only other inhabitants of the kitchen were the parrot and the kitten, and now this Chinese boy. Nora's special work-room was a great pantry with a latticed window. Near-by a wide door led out into a little garden of apple, pear, and cherry trees; the garden had a grape-arbor too, which ran from the door to a roomy cabin. Here was every convenience for washing and ironing.

Nora was a portly woman, with a round face, large forehead, and a little nose which seemed to be always laughing....