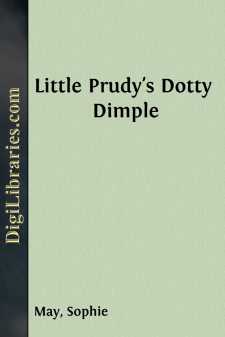 Alice was the youngest of the Parlin family. When Grandma Read called the children into the kitchen, and told them about their new little sister, Susy danced for joy; and Prudy, in her delight, opened the cellar door, and fell down the whole length of the stairs. However, she rolled as softly as a pincushion, and was not seriously hurt.

"But you can't go into mother's room," said Susy, "you're crying so hard."

"Poh!" replied three-years-old Prudy, twinkling off the tears; "yes, I can neither. I won't go crying in! I didn't hurt me velly bad. I'm weller now!"

So she had the first peep at the wee dot of a baby in the nurse's arms.

The baby made no reply.

"Why! don't you love me? This is me: my name's Prudy. I've got a red pocket dress;—Santa Claw bringed it."

Still the little stranger paid no heed,—only winked her small, bright eyes, and at last closed them entirely.

It seemed to Susy that this was the happiest day of her life. She stole up to her mother and kissed her. "O, mamma," said she, "wasn't God good to send this little sister?—Why, I'm crying," added Susy, greatly surprised: "what do you suppose makes me cry, when I'm happy all over—clear to the ends of my fingers?"

"Yes, your eyes are sprinklin' down tears, but you're laughing all over your face; and so 'm I," said little Prudy, delighted to see some one else as foolish as herself.

"Susan, I hope thee'll receive this new sister as a gift from God," said grandma Read, wiping her spectacles.

"It seems so funny," said Susy, gently stroking the baby's face; "so funny for me to have a new sister."

"Now you've tolled a story, Susy Parlin; she was sended to me,—isn't I the littlest?" cried bruised and battered Prudy, shaking with another tempest of tears, and kissing the baby violently.

The nurse who was a smiling woman, with a wart on her nose, began to frown a little, and grandma Read, patting Prudy's head, whispered to her that if she did not stop crying she must leave the room, as the noise she made disturbed her mother.

"Then I'll—I'll be—just as good as a lady, and I won't kiss her no more," replied little Prudy between her sobs, at the same time prying open baby's mouth with her busy fingers.

"O," said Susy, in an ecstasy, "isn't she such a velvet darling? What cunning little footsie-tootsies! Shaped just like a flatiron! But I haven't seen her eyes yet."

"O, fie, Miss Prudy," said the nurse, biting her lips; "now you'll certainly have to leave the room. It's not safe for you to come near this tiny bit of a baby. Nobody ever knows what you are likely to do next."