Little Pollie Or a Bunch of Violets 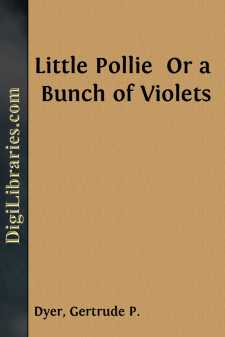 CHAPTER I. POLLIE STARTS IN BUSINESS.

But the throng of busy clerks hurrying on to their various places of business heard not that childish voice amidst the confused din of omnibus and cabs, and so she stood, timidly uttering her cry—"Sweet violets!"—unheeded by the passers-by.

She was a fragile little creature of about ten years old, small for her age, with shy yet trustful eyes, and soft, brown, curly hair; and as she stood there, clad in a black frock and a straw hat, well worn, it is true, but free from tatters, with a piece of crape neatly fastened around it, had any one amidst that busy multitude paused to look at the little flower-seller, they would have wondered why so young a child was trusted alone in that noisy, bustling place.

"I say, Pollie, how many have yer sold, eh?" exclaimed another girl, coming up to her—quite a different type of girlhood, a regular London arab, one who from her very cradle (if ever she possessed such a luxury) had battled through life heedless of all rubs and bruises, ready to hold her own against the entire world, and yet with much of hidden goodness beneath the rugged surface.

"Only two!" repeated the other. "My eye! yer won't make a fortin, that's sartin!"

"The people don't seem to see me, not even hear me," said the child.

"'Cos why, you don't shout loud enuff," explained the bigger girl. "If yer wants to get on in the world, yer must make a noise somehow. Make the folks hear; never minds if yer deafens 'em, they'll pay 'tention to yer then. See how I does it."

At that moment four smart youths came strolling leisurely along arm-in-arm, trying to appear as though merely out on pleasure, though they knew full well they must be in their office and at their desks before the clock struck ten.

These were just the customers for Sally Grimes, and away she rushed full upon them, her thin ragged shawl flying in the wind, and her rough hair, from which the net had fallen, following the example of the shawl; and as she reached the somewhat startled youths, who almost stumbled over her, she held her only remaining posy right in their faces, screaming out in a harsh grating voice, rendered harsh by her street training—

"Now, then, gents, this last bunch—only a penny!"

Polly looked on in utter amazement. It is true she did not understand Sally's logic, but she saw plainly that the sweet violets were sold, for presently back came the girl, crying out—

"That's the way to do it. I've sold all mine; now let's see what you've got left. Why, ten more bunches! Come, give us two or three, I'll get rid of 'em for yer; I'll bring yer back the money. Look sharp, I see some folks a-comin'."

And without further parley she snatched up several of the dainty little bunches tied up so neatly by Pollie's mother, and rushed off in pursuit of purchasers....