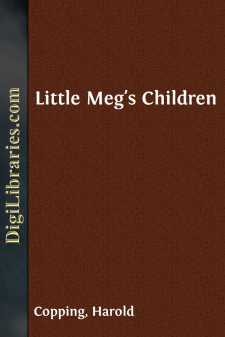 In the East End of London, more than a mile from St Paul's Cathedral, and lying near to the docks, there is a tangled knot of narrow streets and lanes, crossing and running into one another, with blind alleys and courts leading out of them, and low arched passages, and dark gullies, and unsuspected slums, hiding away at the back of the narrowest streets; forming altogether such a labyrinth of roads and dwellings, that one needs a guide to thread a way among them, as upon pathless solitudes or deserts of shifting sands. In the wider streets it is possible for two conveyances to pass each other; for in some of them, towards the middle of their length, a sweeping curve is taken out of the causeway on either side to allow of this being done; but in the smaller and closer streets there is room spared only for the passage to and fro of single carts, while here and there may be found an alley so narrow that the neighbours can shake hands, if they would, from opposite windows. Many of the houses are of three or four stories, with walls, inside and out, dingy and grimed with smoke, and with windows that scarcely admit even the gloomy light which finds a way through the thick atmosphere, and down between the high, close buildings.

A few years ago in one of these dismal streets there stood a still more dismal yard, bearing the name of Angel Court, as if there yet lingered among those grimy homes and their squalid occupants some memories of a brighter place and of happier creatures. Angel Court was about nine feet wide, and contained ten or twelve houses on each side, with one dwelling at the further end, blocking up the thoroughfare, and commanding a view down the close, stone-paved yard, with its interlacing rows of clothes-lines stretched from window to window, upon which hung the yellow, half-washed rags of the inhabitants. This end house was three stories high, without counting a raised roof of red tiles, forming two attics; the number of rooms in all being eight, each one of which was held by a separate family, as were most of the other rooms in the court. To possess two apartments was almost an undreamed-of luxury.

There was certainly an advantage in living in the attics of the end house in Angel Court, for the air was a trifle purer there and the light clearer than in the stories below. From the small windows might be seen the prospect, not only of the narrow court, but of a vast extent of roofs, with a church spire here and there, and the glow of the sky behind them, when the sun was setting in a thick purplish cloud of smoke and fog. There was greater quiet also, and more privacy up in the attics than beneath, where all day long people were trampling up and down the stairs, and past the doors of their neighbours' rooms. The steep staircase ended in a steeper ladder leading up to the attics, and very few cared to climb up and down it. It was perhaps for these reasons that the wife of a sailor, who had gone to sea eight months before, had chosen to leave a room lower down, for which he had paid the rent in advance, in order to mount into higher and quieter quarters with her three children....