Little Masterpieces of Science: The Naturalist as Interpreter and Seer 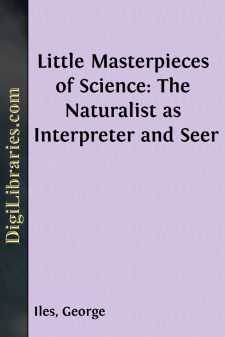 To gather stones and fallen boughs is soon to ask, what may be done with them, can they be piled and fastened together for shelter? So begins architecture, with the hut as its first step, with the Alhambra, St. Peter's, the capitol at Washington, as its last. In like fashion the amassing of fact suggests the ordering of fact: when observation is sufficiently full and varied it comes to the reasons for what it sees. The geologist delves from layer to layer of the earth beneath his tread, he finds as he compares their fossils that the more recent forms of life stand highest in the scale of being, that in the main the animals and plants of one era are more allied to those immediately next than to those of remoter times. He thus divines that he is but exploring the proofs of lineal descent, and with this thought in his mind he finds that the collections not only of his own district, but of every other, take on a new meaning. The great seers of science do not await every jot and tittle of evidence in such a case as this. They discern the drift of a fact here, a disclosure there, and with both wisdom and boldness assume that what they see is but a promise of what shall duly be revealed. Thus it was that Darwin early in his studies became convinced of the truth of organic evolution: the labours of a lifetime of all but superhuman effort, a judicial faculty never exceeded among men, served only to confirm his confidence that all the varied forms of life upon earth have come to be what they are through an intelligible process, mainly by “natural selection.”

The present volume offers from the classic pages of Darwin his summary of the argument of “The Origin of Species,” his account of how that book came to be written, and his recapitulation of “The Descent of Man.” All this affords a supreme lesson as to the value of observation with a purpose. When Darwin was confronted with an organ or trait which puzzled him, he was wont to ask, What use can it have had? And always the answer was that every new peculiarity of plant, or beast, is seized upon and held whenever it confers advantage in the unceasing conflict for place and food. No hue of scale or plume, no curve of beak or note of song, but has served a purpose in the plot of life, or advanced the action in a drama where the penalty for failure is extinction.

As Charles Darwin stood first among the naturalists of the nineteenth century, his advocacy of evolution soon wrought conviction among the thinkers competent to follow his evidence and weigh his arguments. The opposition to his theories though short was sharp, and here he found a lieutenant of unflinching courage, of the highest expository power, in Professor Huxley. This great teacher came to America in 1876, and discoursed on the ancestry of the horse, as disclosed in fossils then recently discovered in the Far West, maintaining that they afforded unimpeachable proof of organic evolution. His principal lecture is here given.

In a remarkable field of “natural selection” Bates, Wallace and Poulton have explained the value of “mimicry” as an aid to beasts, birds, insects, as they elude their enemies or lie unsuspected on the watch for prey....