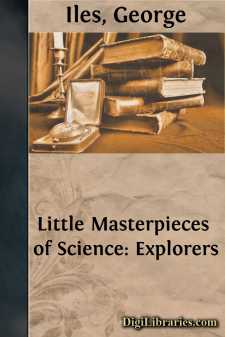 [Part of Chapter IX., “The Final Agreement and the First Voyage” from “Christopher Columbus and How He Received and Imparted the Spirit of Discovery,” copyright by Houghton, Mifflin & Co., Boston and New York, 1892.]

So, everything being ready, on the 3rd of August, 1492, a half-hour before sunrise, he unmoored his little fleet in the stream, and, spreading his sails, the vessels passed out of the little river roadstead of Palos, gazed after, perhaps, in the increasing light, as the little crafts reached the ocean, by the friar of Rabida, from its distant promontory of rock.

The day was Friday, and the advocates of Columbus's canonization have not failed to see a purpose in its choice as the day of our Redemption, and as that of the deliverance of the Holy Sepulchre by Geoffrey de Bouillon, and of the rendition of Granada, with the fall of the Moslem power in Spain. We must resort to the books of such advocates, if we would enliven the picture with a multitude of rites and devotional feelings that they gather in the meshes of the story of the departure. They supply to the embarkation a variety of detail that their holy purposes readily imagine, and place Columbus at last on his poop, with the standard of the Cross, the image of the Saviour nailed to the holy wood, waving in the early breeze that heralded the day. The embellishments may be pleasing, but they are not of the strictest authenticity.

In order that his performance of an embassy to the princes of the East might be duly chronicled, Columbus determined, as his journal says, to keep an account of the voyage by the west, “by which course,” he says, “unto the present time, we do not know, for certain, that any one has passed.” It was his purpose to write down, as he proceeded, everything he saw and all that he did, and to make a chart of his discoveries, and to show the directions of his track.

Nothing occurred during those early August days to mar his run to the Canaries, except the apprehension which he felt that an accident, happening to the rudder of the Pinta,—a steering gear now for some time in use, in place of the old lateral blades,—was a trick of two men, her owners, Gomez Rascon and Christopher Quintero, to impede a voyage in which they had no heart. The Admiral knew the disposition of these men well enough not to be surprised at the mishap, but he tried to feel secure in the prompt energy of Pinzon, who commanded the Pinta.

As he passed (August 24-25, 1492) the peak of Teneriffe, it was the time of an eruption, of which he makes bare mention in his journal. It is to the corresponding passage of the Historie, [written by his son, Fernando,] that we owe the somewhat sensational stories of the terrors of the sailors, some of whom certainly must long have been accustomed to like displays in the volcanoes of the Mediterranean.

At the Gran Canarie the Nina was left to have her lateen sails changed to square ones; and the Pinta, it being found impossible to find a better vessel to take her place, was also left to be overhauled for her leaks, and to have her rudder again repaired, while Columbus visited Gomera, another of the islands. The fleet was reunited at Gomera on September 2. Here he fell in with some residents of the Ferro, the westermost of the group, who repeated the old stories of land occasionally seen from its heights, lying towards the setting sun. Having taken on board wood, water, and provisions, Columbus finally sailed from Gomera on the morning of Thursday, September 6. He seems to have soon spoken a vessel from Ferro, and from this he learned that three Portuguese caravels were lying in wait for him in the neighbourhood of that island, with a purpose, as he thought, of visiting in some way upon him, for having gone over to the interests of Spain, the indignation of the Portuguese king. He escaped encountering them.

Up to Sunday, September 9, they had experienced so much calm weather, that their progress had been slow. This tediousness soon raised an apprehension in the mind of Columbus that the voyage might prove too long for the constancy of his men. He accordingly determined to falsify his reckoning. This deceit was a large confession of his own timidity in dealing with his crew, and it marked the beginning of a long struggle with deceived and mutinous subordinates, which forms so large a part of the record of his subsequent career....