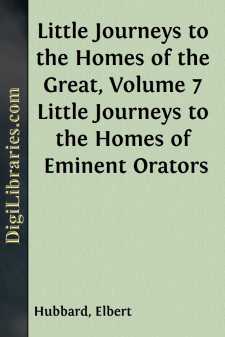 When we agreed, O Aspasia! in the beginning of our loves, to communicate our thoughts by writing, even while we were both in Athens, and when we had many reasons for it, we little foresaw the more powerful one that has rendered it necessary of late. We never can meet again: the laws forbid it, and love itself enforces them. Let wisdom be heard by you as imperturbably, and affection as authoritatively, as ever; and remember that the sorrow of Pericles can rise but from the bosom of Aspasia. There is only one word of tenderness we could say, which we have not said oftentimes before; and there is no consolation in it. The happy never say, and never hear said, farewell.

And now at the close of my day, when every light is dim and every guest departed, let me own that these wane before me, remembering, as I do in the pride and fulness of my heart, that Athens confided her glory, and Aspasia her happiness, to me.

Have I been a faithful guardian? Do I resign them to the custody of the gods, undiminished and unimpaired? Welcome then, welcome, my last hour! After enjoying for so great a number of years, in my public and private life, what I believe has never been the lot of any other, I now extend my hand to the urn, and take without reluctance or hesitation that which is the lot of all.

Once upon a day there was a grocer who lived in Indianapolis, Indiana. The grocer's name being Heinrich Schliemann, his nationality can be inferred; and as for pedigree, it is enough to state that his ancestors did not land at either Plymouth or Jamestown. However, he was an American citizen.

Now this grocer made much moneys, for he sold groceries as were, and had a feed-barn, a hay-scales, a sommer-garten and a lunch-counter. In fact, his place of business was just the kind you would expect a strenuous man by the name of Schliemann to keep.

Soon Schliemann had men on the road, and they sold groceries as far west as Peoria and as far east as Xenia.

Schliemann grew rich, and the opening up of Schliemann's Division, where town lots were sold at auction, and Anheuser-Busch played an important part, helped his bank-balance not a little.

Schliemann grew rich: and the gentle reader being clairvoyant, now sees Schliemann weighed on his own hay-scales—and wanting everything in sight—tipping the beam at part of a ton. The expectation is that Schliemann will evolve into a large oval satrap, grow beautifully boastful and sublimely reminiscent, representing his Ward in the Common Council until pudge plus prunes him off in his prime.

But this time the reader is wrong: Schliemann was tall, slender and reserved, also taciturn. Groceries were not the goal. In fact, he had interests outside of Indianapolis, that few knew anything about. When Schliemann was thirty-eight years old he was worth half a million dollars; and instead of making his big business still bigger, he was studying Greek. It was a woman and Eros taught Schliemann Greek, and this was so letters could be written—dictated by Eros, who they do say is an awful dictator—that would not be easily construed by Hoosier "hoi polloi." Together the woman and Schliemann studied the history of Hellas....