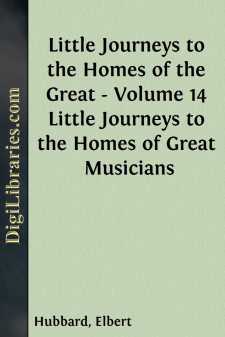 Was ever work like mine created for no purpose? Am I a miserable egotist, possessed of stupid vanity? It matters not, but of this I feel positive; yes, as positive as that I live, and this is, my "Tristan and Isolde," with which I am now consumed, does not find its equal in the world's library of music. Oh, how I yearn to hear it; I am feverish; I am worn. Perhaps that causes me to be agitated and anxious, but my "Tristan" has been finished now these three years and has not been heard. When I think of this I wonder whether it will be with this as with "Lohengrin," which now is thirteen years old, and is still dead to me. But the clouds seem breaking, they are breaking—I am going to Vienna soon. There they are going to give me a surprise. It is supposed to be kept a secret from me, but a friend has informed me that they are going to bring out "Lohengrin."

—Wagner in a Letter to Praeger

bsurd and silly people make jokes about mothers-in-law, stepmothers and stepfathers—we will none of this. My heart warms to the melancholy Jacques, who dedicated his book to his mother-in-law, "my best friend, who always came when she was needed and never left so long as there was work to do." Richard Wagner's stepfather was his patient, loving and loyal friend.

The father of Wagner died when the child was six months old. The mother, scarcely turned thirty, had a brood of seven, no money and many debts. There is trouble for you—ye silken, perfumed throng, who nibble cheese-straws, test the hyson when it is red, and discuss the heartrending aspects of the servant-girl problem to the lascivious pleasings of a lute!

But the widow Wagner was not cast down to earth—she resolved on keeping her family together, caring for them all as best she could. The suggestion from certain kinsmen that the children should be given out for adoption was quickly vetoed. The fine spirit of the woman won the admiration of a worthy actor, in slightly reduced circumstances, who had lodgings in the house of the widow. This actor, Ludwig Geyer by name, loved the widow and all of the brood, and he proposed that they pool their poverty.

And so before Mrs. Wagner had been a widow a twelvemonth they were married.

In this marriage Geyer seemed to be moved to a degree by the sentiment of friendship for his friend, the deceased husband. Geyer was a man of many virtues—amiable, hopeful, kind. He had the artistic temperament without its faults. To writers of novels, in search of a very choice central character, Ludwig Geyer affords great possibilities. He was as hopeful as Triplett and a deal more versatile. The histrionic art afforded him his income of eleven dollars a week; but painting was his forte—if he only had time to devote to the technique! Yet all the arts being one he had written a play; he also modeled in clay and sang tenor parts as understudy to the great Schudenfeldt. Hope, good-cheer and a devotion to art were the distinguishing features of Mein Herr Geyer....