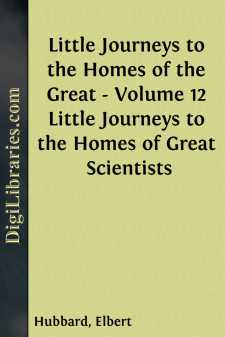 n honest farmer, neither rich nor poor, was Isaac Newton. He was married to Harriet Ayscough in February, Sixteen Hundred Forty-two.

Both were strong, intelligent and full of hope. Neither had any education to speak of; they belonged to England's middle class—that oft-despised and much ridiculed middle class which is the hope of the world. Accounts still in existence show that their income was thirty pounds a year. It was for them to toil all the week, go to church on Sunday, and twice or thrice in a year attend the village fairs or indulge in a holiday where hard cider played an important part.

Isaac had served his two years in the army, taken a turn at sea, and got his discharge-papers. Now he had married the lass of his choice, and settled down in the little house on an estate in Lincolnshire where his father was born and died.

Spring came and the roses clambered over the stone walls; the bobolinks played hide-and-seek in the waving grass of the meadows; the skylarks sang and poised and soared; the hedgerows grew white with hawthorn-blossoms and musical with the chirp of sparrows; the cattle ranged through the fragrant clover "knee-deep in June."

Oftentimes the young wife worked with her husband in the fields, or went with him to market. Great plans were laid as to what they would do next year, and the year after, and how they would provide for coming age and grow old together, here among the oaks and the peace and plenty of Lincolnshire.

In such a country, with such a climate, it seems as if one could almost make repair equal waste, and thus keep death indefinitely at bay. But all men, even the strongest, are living under a death sentence, with but an indefinite reprieve. And even yet, with all of our science and health, we can not fully account for those diseases which seemingly pick the very best flower of sinew and strength.

Isaac Newton, the strong and rugged farmer, sickened and died in a week. "The result of a cold caught when sweaty and standing in a draft," the surgeon explained. "The act of God to warn us all of the vanity of life." Acute pneumonia, perhaps, is what we would call it—a fever that burned out the bellows in a week.

In such cases the very strength of the man seems to supply fuel for the flames. And so just as the Autumn came with changing leaves, the young wife was left to fight the battle of life alone—alone, save for the old, old miracle that her life supported another. A wife, a widow, a mother—all within a year!

On Christmas-Day the babe was born—born where most men die: in obscurity. He was so weak and frail that none but the mother believed he would live.

The doctor quoted a line from "Richard the Third," "Sent before my time into this breathing world scarce half made up," and gave the infant into the keeping of an old nurse with an ominous shake of the head, and went his way, absolved. His time was too valuable to waste on such a useless human mite.

The persistent words of the mother that the child should not, must not die, possibly had something to do with keeping the breath of life in the puny man-child....