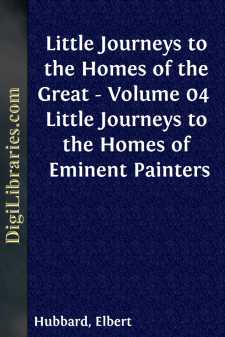 MICHELANGELO How can that be, lady, which all men learnBy long experience? Shapes that seem alive,Wrought in hard mountain marble, will surviveTheir maker, whom the years to dust return!Thus to effect, cause yields. Art hath her turn,And triumphs over Nature. I, who strive with sculpture,Know this well: her wonders liveIn spite of time and death, those tyrants stern.So I can give long life to both of usIn either way, by color or by stone,Making the semblance of thy face and mine.Centuries hence when both are buried,Thus thy beauty and my sadness shall be shown,And men shall say, "For her 'twas wise to pine." —Sonnets of Michelangelo

"Call me by my pet name," wrote Elizabeth Barrett Browning, in one of those incomparable sonnets of which the Portuguese never heard. And the task yet remains for some psychologist to tell us why, when we wish to bestow the highest honor, coupled with familiar affection, we call the individual by a given name.

Young men and maidens will understand my allusion; and I hope this book will not suffer the dire fate of falling into the hands of any one who has forgotten the days of his youth.

In addressing the one we truly revere, we drop all prefix and titles. Soldiers marching under the banner of a beloved leader ever have for him a name of their own. What honor and trust were once compressed into the diminutive, "Little Corporal" or Kipling's "Bobs"; or, to come down to something even more familiar to us, say, "Old Abe" and "Little Phil"!

The earth is a vast graveyard where untold millions of men lie buried, but out of the myriads who pass into forgetfulness every decade, the race holds a few names embalmed in undying amber.

Lovers of art, the round world over, carry in their minds one character, so harmoniously developed on every side of his nature that we say twenty centuries have never produced his equal. We call him "Leonardo"—the one ideal man. Leonardo da Vinci was painter, poet, sculptor, architect, mathematician, politician, musician, man of science, and courtier. His disposition was so joyous, his manner so captivating, his form and countenance so beautiful, that wherever he went all things were his. And he was so well ballasted with brains, and so acute in judgment, that flattery spoiled him not. His untiring industry and transcendent talent brought him large sums of money, and he spent them like a king. So potent was his personality that wherever he made his home there naturally grew up around him a Court of Learning, and his pupils and followers were counted by the score. To the last of his long life he carried with him the bright, expectant animation of youth; and to all who knew him he was "Leonardo—the only Leonardo."

But great as was Leonardo, we call the time in which he lived, the age of Michelangelo.

When Leonardo was forty, and at the very height of his power, Michel Agnola Buonarroti, aged twenty, liberated from the block a marble Cupid that was so exquisite in its proportions that it passed for an antique, and men who looked upon it exclaimed, "Phidias!"

Michel Agnola became Michelangelo, that is to say, "Michel the Angel," in a day....