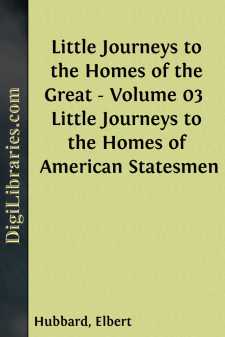 A little more patience, a little more charity for all, a little more devotion, a little more love; with less bowing down to the past, and a silent ignoring of pretended authority; a brave looking forward to the future with more faith in our fellows, and the race will be ripe for a great burst of light and life.—Elbert Hubbard

It was not built with the idea of ever becoming a place in history: simply a boys' cabin in the woods.

Fibe, Rich, Pie and Butch were the bunch that built it.

Fibe was short for Fiber, and we gave him that name because his real name was Wood. Rich got his name from being a mudsock. Pie got his because he was a regular pieface. And they called me Butch for no reason at all except that perhaps my great-great-grandfather was a butcher.

We were a fine gang of youngsters, all about thirteen years, wise in boys' deviltry. What we didn't know about killing cats, breaking window-panes in barns, stealing coal from freight-cars, and borrowing eggs from neighboring hencoops without consent of the hens, wasn't worth the knowing.

There used to be another boy in the gang, Skinny. One day when we ran away to the swimming-hole after school, this other little fellow didn't come back with us.

None of us could swim, and he was too far out to reach. There was nothing to help him with, so we just had to watch him struggle till he had gone down three times. And there where we last saw him a lot of bubbles came up. The inquiry before the Justice of Peace with our fathers, which followed, put fright in our bones, and the sight of the old creek was a nightmare for months to come. After that we decided to keep to the hills and woods. This necessitated a hut. But we had no lumber with which to build it.

However, there were three houses going up in town—and surely they could spare a few boards. So after dark we got out old Juliet and the spring-wagon and made several visits to the new houses. The result was that in about a week we had enough lumber to frame the cabin.

Our site was about three miles from town, high up on the Adams Farm. After many evening trips with the old mare and much figuring we had the thing done, all but the windows, door, and shingles on the roof. Well, I knew where there was an old door and two window-sash taken off our chicken-house to let in the air during Summer. And one rainy night three bunches of shingles found their way from Perkins' lumber-yard to the foot of the hill on the Adams Farm.

In another five days the place was finished. It was ten by sixteen, and had four bunks, two windows, a paneled front door, a back entrance and a porch—altogether a rather pretentious camp for a gang of young ruffians.

But it was a labor of love, and we certainly had worked mighty hard....