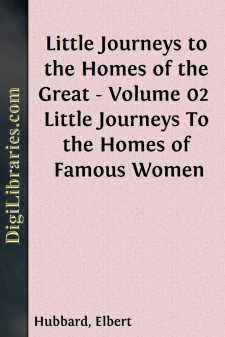 I am Elbert Hubbard's son, and I am entirely familiar with the proposition that "Genius never reproduces."

Heretofore, it has always been necessary to sign my name, "Elbert Hubbard II"—but now there is an embarrassment in that signature, an assumption that I do not feel.

There is no Second Elbert Hubbard. To five hundred Roycrofters, to the Village of East Aurora, and to a few dozen personal friends scattered over the face of the earth, I am Bert Hubbard, plain Bert Hubbard—and as Bert Hubbard I want to be known to you.

I lay no claim to having inherited Elbert Hubbard's Genius, his Personality, his Insight into the Human Heart. I am another and totally different sort of man.

I know my limitations.

Also, I am acquainted with such ability as I possess, and I believe that it can be directed to serve you.

I got my schooling in East Aurora.

I have never been to College. But I have traveled across this Country several times with my Father.

I have traveled abroad with him. One time we walked from Edinburgh to London to prove that we could do it.

My Father has been my teacher—and I do not at all envy the College Man.

For the last twenty years I have been working in the Roycroft Shops.

I believe I am well grounded in Business—also, in Work.

When I was twelve years old my father transferred Ali Baba to the garden—and I did the chores around the house and barn for a dollar a week. From that day forward I earned every dollar that ever came to me.

I fed the printing-press at four dollars a week. Then, when we purchased a gas-engine, I was promoted to be engineer, and given a pair of long overalls.

Two or three years later I was moved into the General Office, where I opened mail and filled in orders.

Again, I was promoted into the Private Office and permitted to sign my name under my Father's, on checks.

Then the responsibility of purchasing materials was given me.

One time or another I have worked in every Department of the Roycroft Shops.

My association with Elbert Hubbard has been friendly, brotherly. I have enjoyed his complete confidence—and I have tried to deserve it.

He believed in me, loved me, hoped for me. Whether I disappointed him at times is not important. I know my average must have pleased him, because the night he said Farewell to the Roycrofters he spoke well of me, very well of me, and he left the Roycroft Institution in my charge.

He sailed away on the "Lusitania" intending to be gone several weeks. His Little Journey has been prolonged into Eternity.

But the work of Elbert and Alice Hubbard is not done. With them one task was scarcely under way when another was launched....