Little Journeys to the Homes of the Great Philosophers, Volume 8 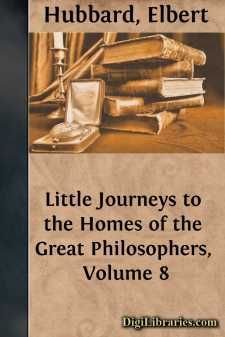 I do not think it possible for a better man to be injured by a worse.... To a good man nothing is evil, neither while living nor when dead, nor are his concerns neglected by the gods.

It was four hundred seventy years before Christ that Socrates was born. He never wrote a book, never made a formal address, held no public office, wrote no letters, yet his words have come down to us sharp, vivid and crystalline. His face, form and features are to us familiar—his goggle eyes, bald head, snub nose and bow-legs! The habit of his life—his goings and comings, his arguments and wrangles, his infinite leisure, his sublime patience, his perfect faith—all these things are plain, lifting the man out of the commonplace and setting him apart.

The "Memorabilia" of Xenophon and the "Dialogues" of Plato give us Boswellian pictures of the man.

Knowing the man, we know what he would do; and knowing what he did, we know the man.

Socrates was the son of Sophroniscus, a stonecutter, and his wife Phænarete. In boyhood he used to carry dinner to his father, and sitting by, he heard the men, in their free and easy way, discuss the plans of Pericles. These workmen didn't know the plans—they were only privates in the ranks, but they exercised their prerogatives to criticize, and while working to assist, did right royally disparage and condemn. Like sailors who love their ship, and grumble at grub and grog, yet on shore will allow no word of disparagement to be said, so did these Athenians love their city, and still condemn its rulers—they exercised the laborer's right to damn the man who gives him work.

Little did the workmen guess—little did his father guess—that this pug-nosed boy, making pictures in the sand with his big toe, would also leave his footprints on the sands of time, and a name that would rival that of Phidias and Pericles!

Socrates was a product of the Greek renaissance. Great men come in groups, like comets sent from afar. Athens was seething with thought and feeling: Pericles was giving his annual oration—worth thousands of weekly sermons—and planning his dream in marble; Phidias was cutting away the needless portions of the white stone of Pentelicus and liberating wondrous forms of beauty; Sophocles was revealing the possibilities of the stage; Æschylus was pointing out the way as a playwright; and the passion for physical beauty was everywhere an adjunct of religion.

Prenatal influences, it seems, played their part in shaping the destiny of Socrates. His mother followed the profession of Sairy Gamp, and made her home with a score of families, as she was needed. The trained nurse is often untrained, and is a regular encyclopedia of esoteric family facts. She wipes her mouth on her apron and is at home in every room of the domicile from parlor to pantry. Then as now she knew the trials and troubles of her clients, and all domestic underground happenings requiring adjustment she looked after as she was "disposed."

Evidently Phænarete was possessed of considerable personality, for we hear of her being called to Mythæia on a professional errand shortly before the birth of Socrates; and in a month after his birth, a similar call came from another direction, and the bald little philosopher was again taken along—from which we assume, following in the footsteps of Conan Doyle, that Socrates was no bottle-baby....