Little Gidding and its inmates in the Time of King Charles I. with an account of the Harmonies 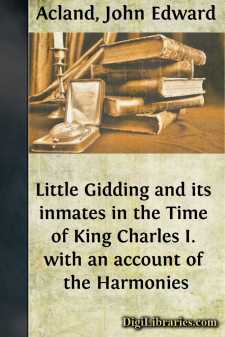 “How happy a king were I, if I had many more such workmen and workwomen in my kingdom!  Their art and ability is excellent.  Let them know I will not forget them.  God’s blessing on their hearts, and painful hands.”

Such were the words and opinions of King Charles I., when speaking of the happy and industrious family whose life and labours at Little Gidding are described in the following pages, a family entirely devoted to good works, under the able direction of Mr. Nicholas Ferrar, whose history has happily been preserved for us with great accuracy, and which can hardly fail to be attractive.

Although Nicholas Ferrar and Little Gidding are names that are invariably associated with one another, it must not be imagined that he spent his whole life there.  It was not, indeed, till he was thirty-three years old that he left the busy and stirring scenes for which he seemed so suited; and before describing the twelve years of seclusion with which he ended his life, it is necessary to say something about his more active employments as a young man.  They prove beyond doubt that he was endued with abilities of the highest order, which might have led him to positions of great public importance had his inclinations so prompted him.

Nicholas Ferrar was born in the year 1592, his parents being conspicuous for their piety and charity, their conscientious discharge of every duty, and their careful training of a numerous family in every point of virtue and religion, special attention being paid to the study of the Bible, large portions of which were committed to memory.

Mr. Ferrar was a merchant, connected with all the great centres of commerce, especially with the East and West Indies; and being given to most generous hospitality, he was on friendly terms with many persons of eminence, such as Drake, Raleigh, and Hawkins.

Nicholas was the third son, and his talents began to develop themselves very early.  His memory, which was naturally very retentive, was carefully cultivated, and he was at all times eager and diligent in his studies.  At the age of fourteen he was admitted to Clare Hall, Cambridge; four years later he took his degree, and was before long elected to a Fellowship.  But his health now broke down, and it was considered that the only chance of his recovery lay in a complete change, and in leaving England.  Just at this time the Princess Elizabeth was starting for the Palatinate, after her marriage with the Elector Frederick, and Ferrar was fortunate in obtaining permission to be included in her suite.  They first went to Holland, but before long Ferrar left the Royal party, as he had resolved on seeing some places not included in the Royal programme.

We must, however, hurry over this part of Ferrar’s life, very interesting as it is, and it must suffice to say that in the course of five years he visited many parts of Germany and Italy, then went to the south of France, by sea to Spain, where he had several startling adventures, and after travelling five hundred miles alone, and on foot, reached Saint Sebastian, from which port he took ship to England.

The advantage of these travels to Ferrar was great in many ways.  He thoroughly mastered the languages of the various countries; he studied closely their forms of government, trade, and commerce, and acquired an insight even into the handicrafts of the people.  He made himself acquainted with the doctrines and discipline of the Churches and religious sects, and procured, whenever he could do so, the assistance of the ablest scholars to instruct him.  Being well supplied with money by his father, he was enabled to collect, besides other things, a great number of prints and engravings by all the best masters; in fact, it is stated that he let nothing of this sort escape him that was valuable; and being all relative to, or illustrative of, passages in the Bible, they were utilized to great advantage when in his later years he compiled “The Harmonies.”

On his return home, his natural inclination was to settle at Cambridge and resume his work at Clare Hall; but, partly owing to his father’s advanced age, and partly on account of his elder brother having important work in London in connection with the Virginia Plantation Company, Nicholas Ferrar determined to settle there with them.  Here he soon attracted much attention for his many eminent qualities, reports of which had, indeed, been received from abroad, and before long Sir Edwyn Sandys and Lord Southampton, both of them governors of the Virginia Company, having discovered for themselves his great worth, proposed him as King’s Counsel for the Plantation.  He thus became deeply engaged in public business; and as his work was continually produced in open court, his reputation increased more and more.  Two or three years later his powers were still further tested, for the Spanish party exerted all their influence to overthrow the Company; and as Nicholas Ferrar was at this time the deputy-governor, the chief burden of the defence fell on his shoulders.  His efforts were, however, all in vain, and before long the patent or charter was withdrawn, and the Company was dissolved, owing to the false accusations brought against the managers and directors....