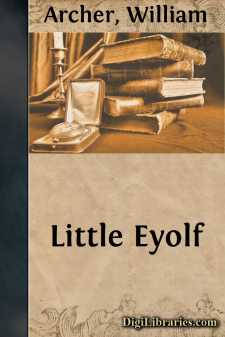 Little Eyolf was written in Christiania during 1894, and published in Copenhagen on December 11 in that year. By this time Ibsen's correspondence has become so scanty as to afford us no clue to what may be called the biographical antecedents of the play. Even of anecdotic history very little attaches to it. For only one of the characters has a definite model been suggested. Ibsen himself told his French translator, Count Prozor, that the original of the Rat-Wife was "a little old woman who came to kill rats at the school where he was educated. She carried a little dog in a bag, and it was said that children had been drowned through following her." This means that Ibsen did not himself adapt to his uses the legend so familiar to us in Browning's Pied Piper of Hamelin, but found it ready adapted by the popular imagination of his native place, Skien. "This idea," Ibsen continued to Count Prozor, "was just what I wanted for bringing about the disappearance of Little Eyolf, in whom the infatuation [Note: The French word used by Count Prozor is "infatuation." I can think of no other rendering for it; but I do not quite know what it means as applied to Allmers and Eyolf.] and the feebleness of his father reproduced, but concentrated, exaggerated, as one often sees them in the son of such a father." Dr. Elias tells us that a well-known lady-artist, who in middle life suggested to him the figure of Lona Hessel, was in later years the model for the Rat-Wife. There is no inconsistency between these two accounts of the matter. The idea was doubtless suggested by his recollection of the rat-catcher of Skien, while traits of manner and physiognomy might be borrowed from the lady in question.

The verse quoted on pp. 52 and 53 [Transcriber's Note: "There stood the champagne," etc., in ACT I] is the last line of a very well-known poem by Johan Sebastian Welhaven, entitled Republikanerne, written in 1839. An unknown guest in a Paris restaurant has been challenged by a noisy party of young Frenchmen to join them in drinking a health to Poland. He refuses; they denounce him as a craven and a slave; he bares his breast and shows the scars of wounds received in fighting for the country whose lost cause has become a subject for conventional enthusiasm and windy rhetoric.

"They looked at each other. He went on his way. There stood their champagne, but they did not touch it." The champagne incident leads me to wonder whether the relation between Rita and Allmers may not have been partly suggested to Ibsen by the relation between Charlotte Stieglitz and her weakling of a husband. Their story must have been known to him through George Brandes's Young Germany, if not more directly. "From time to time," says Dr. Brandes, "there came over her what she calls her champagne-mood; she grieves that this is no longer the case with him." [Note: Main Currents of Nineteenth Century Literature, vol. vi....