Little By Little or, The Cruise of the Flyaway 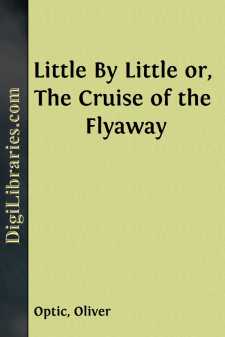 "I'll give you a quarter, Paul, if you will take me down to the Point in your boat," said Thomas Nettle, as he came down to the beach where the boy addressed was baling out an old dingy-looking boat.

"The club went down in their boat."

"But it didn't blow so hard then as it does now. It's a regular sou'easter."

"What are you afraid of, Paul?"

"I'm not afraid; but there's no use of risking your life for a quarter."

Paul Duncan hesitated. Half a dollar was a great deal of money to him, and more than often found its way into his exchequer. He glanced at the white-capped waves in the bay, and then at Thomas.

"There's no ballast in her," said he.

"I think it's rather dangerous, and I don't believe your mother would agree to have you go out in a boat in such a blow as this."

"My mother! Humph! Let me tell you I'm not tied to my mother's apron string. I think I'm old enough to have a will of my own. Don't talk to me about my mother," replied Thomas contemptuously. "I'm not a baby."

"Just as you please; but I think it blows too hard to go out."

"Let me have your boat, and I'll go alone then, if you are afraid to go."

"I'm not afraid," answered Paul, stung by these repeated implications upon his courage. "Jump in, and I'll give you enough of it before you get half way to the Point."

Thomas got into the boat, which was anything but a beauty in her shape and appointments. Paul pushed her off the beach upon which she had grounded, and as she receded from the shore, leaped on board of her. Placing an oar at the stern, he sculled her out a short distance from the land, and then shook out the sail. The first flaw of wind that struck it heeled the boat over so far that Thomas leaped with desperate haste up to the windward side.

"I thought you were by the way you jumped."

"Well, the gunnel of your old craft went under."

"I say it did; and you don't suppose I was going to sit there and be spilled into the drink—do you?" continued Thomas, sharply.

"I won't dispute with you; she heeled over, as a boat always will when she first gets the wind."

"You think you are an old salt, Paul, but you don't know enough to navigate a herring pond."

"Just as you like," replied Paul, whose good nature was proof against the assaults of his companion. "I don't pretend to know much; but I think I understand this old boat pretty well."

"Paul! Paul!" cried a voice from the shore.

"That's my mother," said the young boatman, as he discovered a woman on the beach. "What do you want, mother?"

"Come ashore," replied Mrs. Duncan, whose voice was almost drowned by the noise of the waves as they beat against the boat.

Paul's mother seemed to think she had said enough, for her son was generally a very obedient boy, and she turned to walk up the bluff towards the house. But she knew enough about the management of a boat to perceive that, in this instance, her order was not obeyed.

"Come ashore right off, Paul," she repeated with an emphasis that was calculated to make an impression upon the rebellious party.

"Do you want me, mother?" asked Paul, as he put the boat about, and brought her upon the home tack.

"No, I don't want you; but it blows too hard for you to be out there. You'll capsize, as true as you're alive," replied Mrs. Duncan; and seeing the boat headed towards the shore, she hastened home.

"Are you going to back out, Paul?" demanded Thomas, as the boat came about.

"My mother won't let me go," replied Paul, rather sheepishly, for he was not proof against the derision of his companion....