Little Busybodies The Life of Crickets, Ants, Bees, Beetles, and Other Busybodies 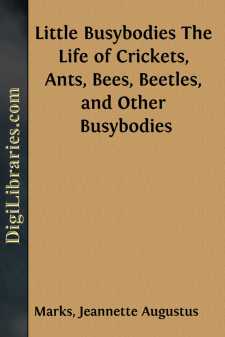 A WORD TO THE CHILDREN AND THE WISE

We hope that the children who read this book will like the boys and girls who are in it. They are real, and the good times they have are real, as any boy or girl who has lived out-of-doors will know. And the stories are true. Peter is not always good. But do you expect a child always to be good? We do not. Sometimes, too, the frolics turn into a scramble to catch a dragon-fly that will not be caught, and there are accidents. Also, Betty and Jack work hard to win a prize which the guide gives to the child who learns most about ants.

Of course it would be impossible for five children to go in search of locusts, grasshoppers, crickets, katydids, dragon-flies, May-flies, leaf-hoppers, lace-wings, caddis-worms, butterflies, beetles, bees, wasps—and so many other six-legged creatures that among them they have wings and legs enough to fill a new Pandora's box—without having a good deal happen. And a good deal does happen. It is all true enough, and every word about the six-legged busybodies is true as true. The other books, too, that come after this in our Story-Told Science Series will be every word true.

And we who wrote this book? Well, we, too, have been children. We used to climb trees and turn somersaults; why—But that is another story! And we remember so well what it used to be like to have to learn dull things we did not wish to know. So we said to ourselves, as we looked over our spectacles at each other, "No, they sha'n't be told a single uninteresting fact; they sha'n't be dull, poor dears, as we were so long ago, before we put on spectacles and began to call ourselves wise."

And so, although we sat down and wrote a book just about long enough for a school-year's work; although we felt very proud because our stories had more wonderful six-legged creatures than any book written for children; although we took pains to have in the book only such little creatures as any one of us could see any day; although we hoped that mothers and teachers would say, "At last, this is a book the children and I can like and find useful!" or, "There, that will help as a starting-point to tell about the bees and the flowers!" or, "This story about the flies will teach the children what it means to be clean!" Although, I say, we hoped all these things, yet our chief hope was that we might give all sorts of children a good time.

So we put our spectacles on and looked very wise, and took a quantity of ink on our pens and began to write. And we wrote and wrote and wrote. And part of the time, while one of us was writing and hoping the stories would be so interesting the children would want to write about them, too, the other was drawing and labelling each sketch so plainly that any child could understand it, even if the ears were quite where they could not be expected to be, or there were more eyes than, seemingly, one creature ought to have, or wings and legs served to make music, as no sensible child could possibly guess.

And now we can't do better than wish you a good time before we say good-bye....