Little Brothers of the Air 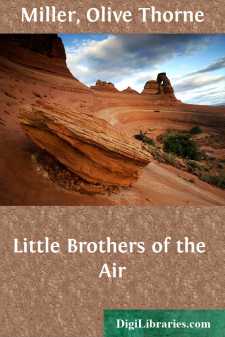 To study a nest is to make an acquaintance. However familiar the bird, unless the student has watched its ways during the only domestic period of its life,—nesting time,—he has still something to learn. In fact, he has almost everything to learn, for into those few weeks is crowded a whole lifetime of emotions and experiences which fully bring out the individuality of the bird. Family life is a test of character, no less in the nest than in the house. Moreover, to a devotee of the science that some one has aptly called Ornithography, nothing is so attractive. What hopes it holds out! Who can guess what mysteries shall be disclosed, what interesting episodes of life shall be seen about that charmed spot?

To find a newly built nest is the first June work of the bird-student, and this year on the Great South Bay a particularly inviting one presented itself, on the top branch of a tall oak-tree near my "inn of rest." It was in plain sight from the veranda. The builder evidently cared nothing for concealment, and relied, with reason, upon its inaccessible position for safety. To be sure, as days went by and oak leaves grew, a fair screen for the little dwelling was not lacking; but summer breezes were kind, and often blew them aside, and, better still, from other points of view the nest was never hidden.

To whom, then, did the nest belong? I hoped to the kingbird, who at that moment sat demurely upon the picket fence below, apparently interested only in passing insects; and while I looked the question was answered by Madame Tyrannis herself, who came with the confidence of ownership, carrying a beakful of building material, and arranging it with great pains inside the structure. This was satisfactory, for I did not know the kingbird in domestic life.

For several days it seemed uncertain whether the kingbirds would ever really occupy the nest, so spasmodic was the work upon it. Now one of the pair came with a bit of something, placed it, tried its effect this way and that, and then disappeared; while for hours every day both might be seen about the place, hunting insects and taking their ease on the fence as if no thought of nesting ever stirred their wise little heads. The last addition to the domicile was curious: a soft white feather from the poultry yard, which was fastened up on the edge, and stood there floating in the breeze; a white banner of peace flung out to the world from her castle walls.

Peace from a kingbird? Direful tales are told of this bird: "he is pugnacious," says one writer; "he fights everybody," adds another; "he is a coward," remarks a third. Science has dubbed him tyrant (Tyrannis), and his character is supposed to be settled. But may there not be two sides to the story? We shall see. One kingbird, at least, shall be studied sympathetically; we shall try to enter his life, to judge him fairly, and shall above all

"bring notThe fancies found in books,Leave author's eyes, and fetch our own."

Nearly two months that small dwelling on the oak was watched, day after day, early and late, in storm and in sunshine; now I know at least one family of kingbirds, and what I know I shall honestly tell, "nothing extenuating."

The house was built, the season was passing, yet housekeeping did not begin....