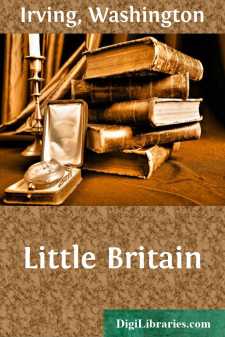 In the centre of the great city of London lies a small neighborhood, consisting of a cluster of narrow streets and courts, of very venerable and debilitated houses, which goes by the name of LITTLE BRITAIN. Christ Church School and St. Bartholomew's Hospital bound it on the west; Smithfield and Long Lane on the north; Aldersgate Street, like an arm of the sea, divides it from the eastern part of the city; whilst the yawning gulf of Bull-and-Mouth Street separates it from Butcher Lane, and the regions of Newgate. Over this little territory, thus bounded and designated, the great dome of St. Paul's, swelling above the intervening houses of Paternoster Row, Amen Corner, and Ave Maria Lane, looks down with an air of motherly protection.

This quarter derives its appellation from having been, in ancient times, the residence of the Dukes of Brittany. As London increased, however, rank and fashion rolled off to the west, and trade, creeping on at their heels, took possession of their deserted abodes. For some time Little Britain became the great mart of learning, and was peopled by the busy and prolific race of booksellers; these also gradually deserted it, and, emigrating beyond the great strait of Newgate Street, settled down in Paternoster Row and St. Paul's Churchyard, where they continue to increase and multiply even at the present day.

But though thus falling into decline, Little Britain still bears traces of its former splendor. There are several houses ready to tumble down, the fronts of which are magnificently enriched with old oaken carvings of hideous faces, unknown birds, beasts, and fishes; and fruits and flowers which it would perplex a naturalist to classify. There are also, in Aldersgate Street, certain remains of what were once spacious and lordly family mansions, but which have in latter days been subdivided into several tenements. Here may often be found the family of a petty tradesman, with its trumpery furniture, burrowing among the relics of antiquated finery, in great, rambling, time-stained apartments, with fretted ceilings, gilded cornices, and enormous marble fireplaces. The lanes and courts also contain many smaller houses, not on so grand a scale, but, like your small ancient gentry, sturdily maintaining their claims to equal antiquity. These have their gable ends to the street; great bow-windows, with diamond panes set in lead, grotesque carvings, and low arched door-ways.

In this most venerable and sheltered little nest have I passed several quiet years of existence, comfortably lodged in the second floor of one of the smallest but oldest edifices. My sitting-room is an old wainscoted chamber, with small panels, and set off with a miscellaneous array of furniture. I have a particular respect for three or four high-backed claw-footed chairs, covered with tarnished brocade, which bear the marks of having seen better days, and have doubtless figured in some of the old palaces of Little Britain. They seem to me to keep together, and to look down with sovereign contempt upon their leathern-bottomed neighbors: as I have seen decayed gentry carry a high head among the plebeian society with which they were reduced to associate. The whole front of my sitting-room is taken up with a bow-window, on the panes of which are recorded the names of previous occupants for many generations, mingled with scraps of very indifferent gentlemanlike poetry, written in characters which I can scarcely decipher, and which extol the charms of many a beauty of Little Britain who has long, long since bloomed, faded, and passed away. As I am an idle personage, with no apparent occupation, and pay my bill regularly every week, I am looked upon as the only independent gentleman of the neighborhood; and, being curious to learn the internal state of a community so apparently shut up within itself, I have managed to work my way into all the concerns and secrets of the place....