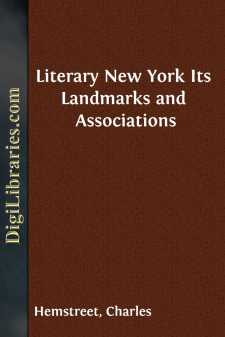 THERE is a fashion nowadays of trimming the fronts of brick houses by placing black bricks among the red in such a way as to form odd and unique designs. It is an attractive way of doing, for it varies the staid simplicity of the solid color. But for all it may seem original and new, it is a style that had its beginning long, long ago, even in the days when the stern Peter Stuyvesant governed with an iron hand over the Dutch colony of fifteen hundred people, the town that was one day to be New York, but which in his time was called New Amsterdam.

It was a tiny town then; picturesque, too, for the houses were low, irregular, with sloping roofs and gable ends to the street. They were built of wood—that is, all except the church, the Stadt Huys, the Governor's house, and some few dwellings of colonists who had brought much wealth with them from Holland. These were for the most part of stone. It was usual in them all—there were scarcely more than a hundred,—whether of wood or stone, to have chimneys outside the walls, thus making less the danger of fire, and if any part of the house were of brick it was sure to be the chimney. All the brick had then to be brought from Holland, so it was an expensive building material and but sparingly used.

At this time when Stuyvesant held full sway there were two industrious colonists who held the idea that their short-cut to immense wealth lay in the way of making bricks at home and supplying them to their fellow colonists. So it came about, after long and slow deliberation, that the first brickyard was started. To be sure the venturesome fortune-hunters soon found that they were not to succeed all at once, for, owing to their lack of knowledge, they ruined so many of their bricks that the profits of the business were like to be consumed in the black-burned material that they threw aside as worthless.

But just at this time an odd thing happened. This was no less than the appearance of a colonist who agreed to buy—at a low price to be sure, but still to buy—all the black-burned and apparently useless brick. The brickmakers wondered very much at this, and without doubt thought the man a trifle unsound in his mind, but they agreed, and very soon the buyer had built himself a house, which when it was completed showed the burnt brick alternating with the red, prettily decorating the front and making of it the most attractive dwelling in the town. And at this they were filled with admiration and respect. All the townspeople went to look at the house, and while looking marvelled that Jacob Steendam could have thought out such a useful plan, for he was not known as a practical man. Anything but that, for was he not a poet? More than this, was he not the only poet in the colony? And still more than this, he was the first poet of New Amsterdam.

And in other ways, too, this first literary man of the colony was no ordinary man. He had come to New Amsterdam in the employ of the owners of the colony, the Dutch West India Company, and he worked in the Company's warehouse....