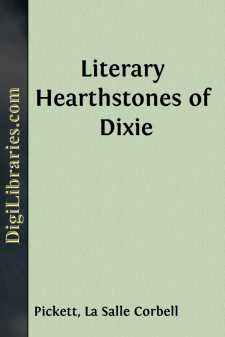 "THE POET OF THE NIGHT"

"I am a Virginian; at least, I call myself one, for I have resided all my life until within the last few years in Richmond."

Thus Edgar A. Poe wrote to a friend. The fact of his birth in Boston he regarded as merely an unfortunate accident, or perhaps the work of that malevolent "Imp of the Perverse" which apparently dominated his life. That it constituted any tie between him and the "Hub of the Universe," unless it might be the inverted tie of opposition, he never admitted. The love which his charming little actress mother cherished for the city in which she had enjoyed her greatest triumphs seemed to have turned to hatred in the heart of her brilliant and erratic son. In his short and disastrous sojourn in Boston, when his fortunes were at their lowest ebb, it is not likely that his thought once turned to the old house on Haskins, now Carver, Street, where his ill-starred life began.

The reason given by Poe, "I have resided there all my life until within the last few years," suggests but slight cause for his love of Richmond, the home of his childhood, the darkening clouds of which, viewed through the softening lens of years, may have shaded off to brighter tints, as the roughness of a landscape disappears and melts into mystic, dreamy beauty as we journey far from the scene.

The three women who had been the stars in the troubled sky of his youth irradiated his memory of the Queen City of the South. In the churchyard of historic old Saint John's, that once echoed to the words of Patrick Henry, "Give me liberty or give me death!" Poe's mother lay in an unidentified grave. In Hollywood slept his second mother, who had surrounded his boyhood with the maternal affection that, like an unopened rose in her heart, had awaited the coming of the little child who was to be the sunbeam to develop it into perfect flowering. On Shockoe Hill was the tomb of "Helen," his chum's mother, whose beauty of face and heart brought the boyish soul

To the Glory that was Greece

And the grandeur that was Rome.

Through the three-fold sanctification of the twin priestesses, Love and Sorrow, Richmond was his home.

So Virginia claims her poet son, the tragedy of whose life is a gloomy, though brilliant, page in the history of American literature.

There are varying stories told of Poe's Richmond home. The impression that he was the inmate of a stately mansion, where he was trained to extravagance which wrought disaster in later years, is not borne out by the evidence. When the loving heart and persistent will of Mrs. Allan opened her husband's reluctant door to the orphaned son of the unfortunate players, that door led into the second story of the building at the corner of Fourteenth Street and Tobacco Alley, in which Messrs. Ellis & Allan earned a comfortable, but not luxurious, living by the sale of the commodity which gave the alley its name. As it was customary in those days for merchants to live in the same building with their business, the fact that he did so does not argue that Mr....