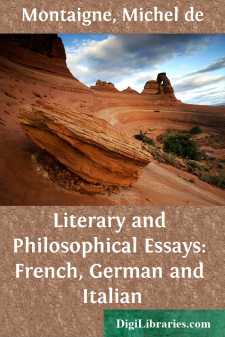 The very children are acquainted with the storie of Croesus to this purpose: who being taken by Cyrus, and by him condemned to die, upon the point of his execution, cried out aloud: "Oh Solon, Solon!" which words of his, being reported to Cyrus, who inquiring what he meant by them, told him, hee now at his owne cost verified the advertisement Solon had before times given him; which was, that no man, what cheerefull and blandishing countenance soever fortune shewed them, may rightly deeme himselfe happie, till such time as he have passed the last day of his life, by reason of the uncertaintie and vicissitude of humane things, which by a very light motive, and slight occasion, are often changed from one to another cleane contrary state and degree. And therefore Agesilaus answered one that counted the King of Persia happy, because being very young, he had gotten the garland of so mightie and great a dominion: "yea but said he, Priam at the same age was not unhappy." Of the Kings of Macedon that succeeded Alexander the Great, some were afterward seene to become Joyners and Scriveners at Rome: and of Tyrants of Sicilie, Schoolemasters at Corinth. One that had conquered halfe the world, and been Emperour over so many, Armies, became an humble and miserable suter to the raskally officers of a king of AEgypte: At so high a rate did that great Pompey purchase the irkesome prolonging of his life but for five or six moneths. And in our fathers daies, Lodowicke Sforze, tenth Duke of Millane, under whom the State of Italic had so long beene turmoiled and shaken, was seene to die a wretched prisoner at Loches in France, but not till he had lived and lingered ten yeares in thraldom, which was the worst of his bargaine. The fairest Queene, wife to the greatest King of Christendome, was she not lately scene to die by the hands of an executioner? Oh unworthie and barbarous cruelties And a thousand such examples. For, it seemeth that as the sea-billowes and surging waves, rage and storme against the surly pride and stubborne height of our buildings, so are there above, certaine spirits that envie the rising prosperities and greatnesse heere below.

And it seemeth Fortune doth sometimes narrowly watch the last day of our life, thereby to shew her power, and in one moment to overthrow what for many yeares together she had been erecting, and makes us cry after Laberius, Nimirum hoc die una plus vixi, mihi quam vivendum fuit....