Lines in Pleasant Places Being the Aftermath of an Old Angler 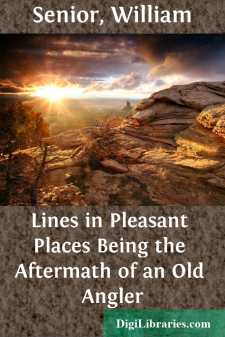 The half a dozen or so of Angling books which stand to my name were headed by Waterside Sketches, and this is really and truly a continuation, if not the end, of the series. They were inspired by my old friend Richard Gowing, at the Whitefriars Club, of which he was for many years the well-remembered honorary secretary, and of which I still have the grateful pride of being entitled to the name of father.

Gowing had become editor of the Gentleman's Magazine in 1874, and in his sturdy efforts to give it new life he looked round amongst the youngsters who seemed likely to serve him. The result was that he invited me to try my hand at something. He had read my Notable Shipwrecks, which the house of Cassells was at that time bringing out, and said that its author, known to the public as "Uncle Hardy" only, ought to be able to offer a suggestion.

The Stoke Newington reservoirs had about that time given me some good sport with pike, large perch, chub, and tench, and I had long been an angling enthusiast. Out of the fullness of my heart I spoke. I told him that fishing was my best subject; that if he would accept a series of contributions the direct object of which was to make Angling articles as interesting to non-anglers as to anglers themselves, I would be his man.

Verily I would not wonder if, in showing how botany, agriculture, out-of-door life generally might be woven into the warp and woof of the fabric, I became eloquent; for, as I have said, out of the heart the mouth spoke. So it was agreed, and for a while "Red Spinner's" articles graced the pages of the magazine, and they were by and by republished in Waterside Sketches. They afterwards gave me entrance to Bell's Life and to the Field, and a name at any rate amongst the brethren of the Angle, as to which I must not gush, but which is very dear to the musings of an old man's eventide. How much I owe to "Red Spinner" I shall never know. The name has followed me, and my brothers of the Highbury Anglers have adopted it, but last year, in honour of their always loyal, but I feel sure no longer useful President. I was much amused to find how it had also followed me to Queensland. During one of the Parliamentary recesses I went up country, the guest of a squatter who was afterwards in the Ministry, and he introduced me to a fellow squatter member in my surname as an officer of Parliament. Neither the name nor office meant anything to him. But when we were smoking in the veranda, and my friend mentioned, as an aside, that I was "Red Spinner," the visitor leaped to his feet, came at me with a double grip, and shouted a Scotch salmon-fisher's welcome, turning to my host and furiously demanding, "Why the dickens didn't you tell me so at first?"

On another Bush visit an officer in the Mounted Police showed me amongst his curiosities a copy of Waterside Sketches half devoured by dingoes, and found with the scraps scattered around the skeleton of a poor wayfarer left at the foot of a gum-tree....