Lights and Shadows of New York Life or, the Sights and Sensations of the Great City 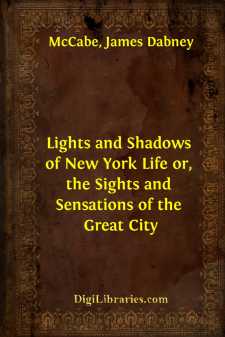 It is the desire of every American to see New York, the largest and most wonderful city in the Union.  To very many the city and its attractions are familiar, and the number of these persons is increased by thousands of new comers every year.  A still greater number, however, will know the Great City only by the stories that reach them through their friends and the newspapers.  They may never gaze upon its beauties, never enjoy its attractions in person.  For their benefit I have written these pages, and I have endeavored to present to them a faithful picture of the “Lights and Shadows” of the life of this City, and to describe its “Sights and Sensations” as they really exist.

This Great City, so wonderful in its beauty, so strange to eyes accustomed only to the smaller towns of the land, is in all respects the most attractive sight in America, and one of the most remarkable places in the world, ranking next to London and Paris in the extent and variety of its attractions.  Its magnificence is remarkable, its squalor appalling.  Nowhere else in the New World are seen such lavish displays of wealth, and such hideous depths of poverty.  It is rich in historical associations and in treasures of art.  It presents a wonderful series of combinations as well as contrasts of individual and national characteristics.  It is richly worth studying by all classes, for it is totally different from any other city in the world.  It is always fresh, always new.  It is constantly changing, growing greater and more wonderful in its power and splendors, more worthy of admiration in its higher and nobler life, more generous in its charities, and more mysterious and appalling in its romance and its crimes.  It is indeed a wonderful city.  Coming fresh from plainer and more practical parts of the land, the visitor is plunged into the midst of so much beauty, magnificence, gayety, mystery, and a thousand other wonders, that he is fairly bewildered.  It is hoped that the reader of these pages will be by their perusal better prepared to enjoy the attractions, and to shun the dangers of New York.  It has been my effort to bring home to those who cannot see the city for themselves, its pleasures and its dangers, and to enable them to enjoy the former without either the fatigue or expense demanded of an active participant in them, and to appreciate the latter, without incurring the risks attending an exploration of the shadowy side of the Great City.

To those who intend visiting New York, whether they come as strangers, or as persons familiar with it, the writer has a word to say, which he trusts may be heeded.  An honest effort has been made in this work to present the reader with a fair description of the dangers to which visitors and citizens are alike exposed.  For the purpose of performing this task, the writer made visits, in company with the police officials of the city, to a number of the places described in this work, and he is satisfied that no respectable person can with safety visit them, unless provided with a similar protection.  The curiosity of all persons concerning the darker side of city life can be fully satisfied by a perusal of the sketches presented in this volume.  It is not safe for a stranger to undertake to explore these places for himself.  No matter how clever he may consider himself, no respectable man is a match for the villains and sharpers of New York, and he voluntarily brings upon himself all the consequences that will follow his entrance into the haunts of the criminal and disreputable classes.  The city is full of danger.  The path of safety which is pointed out in these pages is the only one for either citizen or stranger—an absolute avoidance of the vicinity of sin.

Those who have seen the city will, I am sure, confirm the statements contained herein, and will acknowledge the truthfulness of the picture I have drawn, whatever they may think of the manner in which the work is executed....