by F. A. (Frances Alice) Forbes 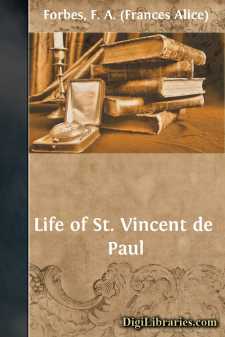 A MONOTONOUS line of sand hills and the sea; a vast barren land stretching away in wave-like undulations far as eye can reach; marsh and heath and sand, sand and heath and marsh; here and there a stretch of scant coarse grass, a mass of waving reeds, a patch of golden-brown fern—the Landes.

It was through this desolate country in France that a little peasant boy whose name was destined to become famous in the annals of his country led his father's sheep, that they might crop the scanty pasture. Vincent was a homely little boy, but he had the soul of a knight-errant, and the grace of God shone from eyes that were never to lose their merry gleam even in extreme old age.

He was intelligent, too, so intelligent that the neighbors said that Jean de Paul was a fool to set such a boy to tend sheep when he had three other sons who would never be good for anything else. There was a family in the neighborhood, they reminded him, who had had a bright boy like Vincent, and had put him to school—with what result? Why, he had taken Orders and got a benefice, and was able to support his parents now that they were getting old, besides helping his brothers to get on in the world. It was well worthwhile pinching a little for such a result as that.

Jean de Paul listened and drank in their arguments. It would be a fine thing to have a son a priest; perhaps, with luck, even a Bishop—the family fortunes would be made forever.

With a good deal of difficulty the necessary money was scraped together, and Vincent was sent to the Franciscans' school at Dax, the nearest town. There the boy made such good use of his time that four years later, when he was only sixteen, he was engaged as tutor to the children of M. de Commet, a lawyer, who had taken a fancy to the clever, hardworking young scholar. At M. de Commet's suggestion, Vincent began to study for the priesthood, while continuing the education of his young charges to the satisfaction of everybody concerned.

Five years later he took minor Orders and, feeling the need of further theological studies, set his heart on a university training and a degree. But life at a university costs money, however thrifty one may be, and although Jean de Paul sold a yoke of oxen to start his son on his career at Toulouse, at the end of a year Vincent was in difficulties. The only chance for a poor student like himself was a tutorship during the summer vacation, and here Vincent was lucky. The nobleman who engaged him was so delighted with the results that, when the vacation was over, he insisted on the young tutor taking his pupils back with him to Toulouse. There, while they attended the college, Vincent continued to direct their studies, with such success that several other noblemen confided their sons to him, and he was soon at the head of a small school.

To carry on such an establishment and to devote oneself to study at the same time was not the easiest of tasks; but Vincent was a hard and conscientious worker, and he seems to have had, even then, a strange gift of influencing others for good....