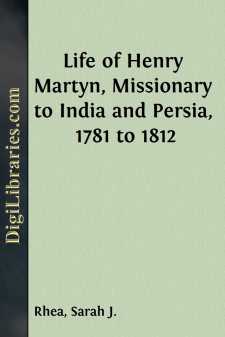 Henry Martyn was born in England on the south-western coast of Truro, February 18, 1781. His father, Mr. John Martyn, worked in the mines. He was not educated but was very fond of learning. The miners were in the habit of working and resting alternately every four hours. Mr. John Martyn spent many of his rest intervals in study, and so by diligence and education raised himself to a higher position, and became a clerk in the office of a merchant in Truro. When Henry was seven years old, he went to school to Dr. Cardew. From his earliest years all who knew him considered him a very interesting and promising child. Dr. Cardew says his proficiency in the classics exceeded that of his schoolfellows; he was of a lively, cheerful temper and seemed to learn without application, almost by intuition. But he was not robust, and loving books better than sport, and having a peculiar tenderness and inoffensiveness of spirit, he was often abused by rude and coarse boys in the school. A friendship which he formed at this time with a boy older than himself was the source of great comfort and advantage to him, and was kept up throughout his whole life. This friend often protected him from the bullies of the play-ground. At this school, under excellent tuition, Henry remained until fourteen years old, when he was induced to offer himself as a candidate for a vacant scholarship at Corpus Christi College, Oxford. Young as he was, he went there alone, and acquitted himself so well, though strongly and ably opposed by competitors, that in the opinion of some of the examiners he ought to have been elected. How often is the hand of God seen in frustrating our fondest designs! Speaking of this disappointment he afterwards wrote: "Had I remained and become a member of the university at that time, as I should have done in case of success, the profligate acquaintances I had there would have introduced me to scenes of debauchery, in which I must in all probability, from my extreme youth, have sunk forever."

He continued after this with Dr Cardew till 1797, and then joined his school friend at Cambridge at St. John's College. Here he obtained a place in the first class at the public examination in December, a circumstance which, joined to the extreme desire he had to gratify his father, encouraged and excited him to study with increased alacrity, and as the fruit of this application, at the next public examination in the summer he reached the second station in the first class, a point of elevation which "flattered his pride not a little." At this time he appeared in the eye of the world most amiable and commendable, outwardly moral, unwearied in application, and exhibited marks of no ordinary talent. One exception to this statement is to be found in an irritability of temper arising perhaps from the treatment he had received at school. On one occasion in sudden anger, he threw a knife at the head of another boy, which providentially missed him and was left trembling in the wall; but it was a narrow escape, and might have proved fatal. Though not a Christian at this time, he was under two strong influences for good, one from his religious friend in college, the other from his sister in Cornwall, a Christian of a meek, heavenly and affectionate spirit. He paid a visit to his home in the summer of 1799, carrying with him no small degree of academical honor. It may be well supposed that to a sister such as we have described, her brother's spiritual welfare would be a most serious and anxious concern; and that she often conversed with him on the subject of religion we know from his own declaration. The first result of her tender exhortations and earnest endeavors was very discouraging; a violent conflict took place in her brother's mind between his conviction of the truth of what she urged, and his love of the world; and for the present, the latter prevailed. Yet, sisters similarly circumstanced may learn from this case, not merely their duty, but also, from the final result, the success they may anticipate in the faithful discharge of it.

"At the examination at Christmas, 1799," he writes: "I was first, and the account of it pleased my father prodigiously, who, I was told, was in great health and spirits. What, then, was my consternation when in January I received an account of his death!" Most poignant were his sufferings under this affliction, which led him to God for comfort in prayer and Bible study. He says: "I began with the Acts, and found myself insensibly led to inquire more attentively into the doctrines of the Apostles." Writing to his sister, having announced shortly and with much simplicity that his name stood first upon the list at the college examination of the summer of 1800, he says: "What a blessing it is for me that I have such a sister as you, my dear S., who have been so instrumental in keeping me in the right way. After the death of our father you know I was extremely low spirited, and like most other people began to consider seriously without any particular determination, that invisible world to which he was gone and to which I must one day go....