Life of Daniel Boone, the Great Western Hunter and Pioneer

by Cecil B. Hartley 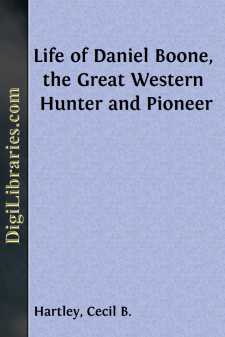 The immediate ancestors and near relations of the American Boone family, resided at Bradwinch about eight miles from Exeter, England. George Boone the grandfather of Daniel, emigrated to America and arrived, with Mary his wife, at Philadelphia, on the 10th of October, 1717. They brought with them eleven children, two daughters and nine sons. The names of three of the sons have come down to us, John, James, and Squire. The last of these, Squire Boone, was the father of Daniel.

George Boone, immediately after his arrival in America, purchased a large tract of land in what is now Bucks County, which he settled, and called it Exeter, after the city near which he was born. The records distinguish it only as the township of Exeter, without any county. He purchased also various other tracts in Maryland and Virginia; and our tradition says, among others, the ground on which Georgetown, District of Columbia, now stands, and that he laid the town out, and gave it his own name. His sons John and James lived and died on the Exeter purchase.

Exeter Township is situated in Bucks County, Pennsylvania, and now has a population of over two thousand. Here Daniel Boone was born, on the 11th of February, 1735.

The maiden name of Boone's mother was Sarah Morgan. Some dispute has arisen respecting the religious persuasion of the Boone family. It would appear, on a review of the whole controversy, that before their removal to this country, the Boones were Episcopalians; but during their residence in Pennsylvania they permitted themselves to be considered Quakers. What sort of a Quaker Daniel Boone himself was, will be apparent in the course of our narrative.

Exeter, the native place of Daniel Boone, was at this period a small frontier settlement, consisting of log-houses, surrounded with woods, which abounded with game of various kinds and were occasionally infested with hostile Indians. It is not surprising that Daniel, passing the period of his boyhood in such a place, should have acquired at an early age the accomplishments of a hunter and woodsman. From a mere child it was his chief delight to roam in the woods, to observe the wild haunts of Nature, and to pursue the wild animals which were then so abundant.

Of the boyhood of Daniel Boone, one of his biographers gives the following account. Speaking of the residence of the family at Exeter, he says:

"Here they lived for ten years; and it was during this time that their son Daniel began to show his passion for hunting....